Reveling in the Renaissance… Elizabethan Style

The 2018 Christmas Revels celebrates music from the time of King Henry VIII and Elizabeth I of England. In addition to notes in the program booklet, this article provides a bit more context for the wide variety of styles of Renaissance music included in this production.

The Music of Henry VIII 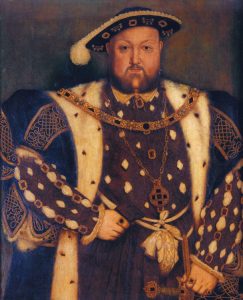 While most of us have some awareness of the most notorious facts and legends about King Henry VIII (who reigned from 1509 to his death in 1547), few are aware that, in addition to his having six wives and founding the Church of England, Henry Tudor was also a poet, musician, athlete, and scholar. Originally destined, as the second son, for an ecclesiastical career, Henry received the musical training appropriate for a clergyman. An expert singer with a clear tenor voice; a player of lute, flute, recorder, cornett, and virginals; and a composer of sacred and secular music, Henry made his court a center of musical culture.

While most of Henry’s sacred compositions have been lost, his secular songs are preserved in a manuscript known as the Henry VIII Song Book, compiled around 1518. It contains thirty-three of his own compositions, as well as an assortment of music by composers that reflects the life and culture of the youthful court. Henry VIII composed the words and music for “Pastyme with Good Companye,” which celebrates the diversions of hunting, eating, drinking, and general merriment. “Whoso That Will Himself Apply” also appears in the Henry VIII Song Book, although attributed to Henry Rysby, a composer about whom we know little.

Music from the Time of Queen Elizabeth I 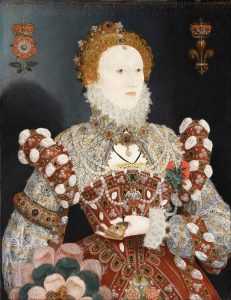 Elizabeth was the only surviving child of Henry VIII by his second queen, Anne Boleyn. In 1558, Elizabeth succeeded her half-sister, Mary I (“Bloody Mary”), and ruled forty-four years until her death in 1603. During Elizabeth’s reign, the determined English navy, assisted by storms, defeated the Spanish Armada; and Sir Francis Drake navigated the world. A time of relative peace and prosperity, the Elizabethan era was a cultural golden age in which the wealthy invested in the arts. A skilled musician who played the virginals and the lute, Elizabeth enjoyed musical entertainments, encouraged musicians and composers, and loved to dance. She performed the particularly demanding dance called the galliard every morning to keep herself fit.

Elizabeth herself was a great patroness of the arts, inspiring a wealth of music, poetry, and drama that has survived into the twenty-first century. During her reign, church music adopted a Protestant tone, emphasizing psalm settings and English texts in addition to those in the still more common Latin. Composers such as William Byrd and Thomas Tallis were among the greatest of that era. Tallis was held in esteem by his colleagues and the four monarchs he served at the Chapel Royal. Byrd, his student, obtained the prestigious post of Gentleman of the Chapel Royal, chief organist and composer for the queen. In 1575, Queen Elizabeth granted Byrd and Tallis an exclusive twenty-one-year license to publish music in England and a monopoly on printing polyphony. As a result, they produced one of the first sets of sacred music printed in England, the Cantiones que ab argumento sacrae vocantur, a collection of thirty-four Latin motets, including Tallis’s “O Nata Lux,” all dedicated to the queen. English composer Peter Philips composed motets (like “Ascendit Deus,” sung at the end of this year’s Christmas Revels) and other compositions that appeared in such collections as Thomas Morley’s First Book of Consort Lessons and the Fitzwilliam Virginal Book. In 1590, Philips, a Roman Catholic priest who had fled to Europe to escape persecution in England, was imprisoned by the Dutch authorities for allegedly planning to assassinate Queen Elizabeth. After standing trial at the Hague, he was acquitted and released. 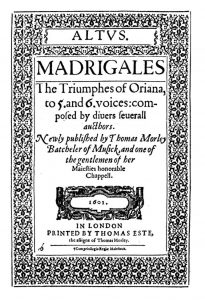 One of the chief glories of the Elizabethan age was the development of a form of secular music meant for social singing by skilled amateurs—the English madrigal. Thomas Weelkes (“Hark, All Ye Lovely Saints Above”) and Thomas Morley (“Arise, Awake” and “Since Robin Hood”) were two of the most influential English madrigal composers, borrowing much from the Italians who had perfected the form decades earlier.

In honor of Queen Elizabeth, Morley compiled twenty-five madrigals by various composers into a volume titled The Triumphes of Oriana and dedicated to Queen Elizabeth (“Oriana,” like “Gloriana,” was a common nickname for Queen Elizabeth). Morely’s own “Arise, Awake” is in this collection.

Polyphonic music was at its peak in the late 1500s; simultaneously the lute became popular as an instrument vocalists could use to accompany their own singing. Robert Johnson (“Have You Seen but a White Lily Grow”) was the son of the lutenist to Elizabeth I and was apprenticed to George Carey, patron of the lutenist and prolific composer John Dowland. “Rest a While You Cruel Cares,” published in Dowland’s First Book of Songs or Airs (1597), was intended to be performed either by one singer and lute or by four voices, which is how we are presenting it. 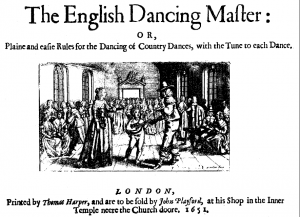 Entertainments for the Queen always included dancing. Music for the volta, galliard, pavane, almand, and many other dances was in such great demand that some composers wrote only dance music for instrumental ensembles. Described by John Dowland as a former “gentleman usher to Queen Elizabeth,” Anthony Holborne was a prolific composer of instrumental dance music, publishing a book of sixty-five compositions for four- and five-part ensembles.

Ballad singing was the popular entertainment of Renaissance England—providing both a glimpse of everyday life and cultural education for all levels of society. While the stories ballads told were sometimes greatly simplified and often exaggerated, they still provided a “common knowledge” to the less educated townsfolk who lacked the means to acquire it elsewhere.

“The Old Year Now Away Is Fled” is a delightful Christmastide ballad set to a tune resembling “Greensleeves.” The story that Henry VIII composed “Greensleeves” for his lover and future queen Anne Boleyn is not likely accurate, since the style of the song resembles that of the later Elizabethan period. The tune is found in several manuscripts, so its origin is not clearly known. We do know that it was well known by the late 1500s; in The Merry Wives of Windsor, Shakespeare’s Falstaff exclaims, “Let the sky rain potatoes! Let it thunder to the tune of ‘Greensleeves’!” Although it was probably written in the 1400s, people in Shakespeare’s day also sang the “Boar’s Head Carol,” based on the tradition of bringing a boar’s head in procession from the kitchen to the hall at the annual Yuletide feast.

One important body of words with music has been preserved thanks to Thomas Ravenscroft (1590–1633), who compiled the largest collection of popular Renaissance music into three printed published volumes. The volumes include folk music ranging from catches, rounds, and madrigals to vendor songs and street cries—even tunes and rounds still familiar today like “Three Blind Mice” and “Hey, Ho, Nobody at Home.” “I Have House and Land in Kent” is one of Ravenscroft’s collected Country Pastimes; while “Tosse the Pot” is one of Ravenscroft’s lighthearted drinking songs, reinforcing the importance of the alehouse in English life.

Music for the Stage: Shakespeare’s Songs 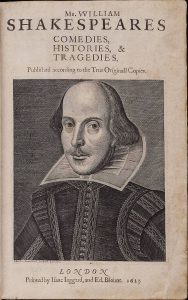 By Shakespeare’s time the music of the church, the court, and the stage had become varied and sophisticated, capable of communicating many feelings. Virtually all plays, whether tragedies or comedies, incorporated music.

William Shakespeare’s plays, in fact, referred to and quoted from over 150 popular ballads and dances. In Shakespeare’s plays, songs were not incidental, but were deliberately used to heighten the drama. The Elizabethan audience was musically literate, so, in many cases, a simple reference to a known ballad was enough to invoke sadness or joy. In creating the 2018 Christmas Revels, we incurred a debt to Ross W. Duffin, author of Shakespeare’s Songbook (2004), a scholarly study of all the songs in Shakespeare’s plays. Just as Shakespeare did, we use these simple ballads to portray young and passionate love, a playful argument between a yeoman and his lady, action (and inaction), and, of course, the mystery of death.

And, as in all Revels, we embrace the power of music to express the deepest feelings, act as a salve for the strongest pains, and heighten our joy in human life, love, and friendship. To quote Shakespeare’s Henry VIII,

In sweet music is such art,
Killing care, & grief of heart.