Piffaro, The Renaissance Band has been delighting Christmas Revels audiences in Washington since 1990. The world-renowned early music ensemble will grace the Lisner stage with its fascinating collection of period wind instruments, and these talented musicians never fail to breathe life into the beautiful music of the Renaissance. Washington Revels’ Music Director Elizabeth Fulford recently had a chance to talk with members of Piffaro about the group’s origins, its work, and its long history with The Christmas Revels. Read on to learn more about Piffaro and the musicians you can see and hear this December! 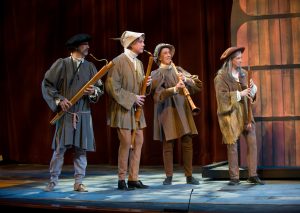 Members of Piffaro performing in the 2007 Elizabethan production.

1. How long has Piffaro, The Renaissance Band been around? Can you tell us a little bit about the formation of the group and its founders?

We were a group of five wind players who were members of the Collegium Musicum, an early music ensemble at the University of Pennsylvania, in the late 70’s. We decided in 1980 to go off on our own to form a group that we then called The Renaissance Wind Band. Our focus was the exploration of early double reeds, the shawm and dulcian, ancestors, respectively, of the modern oboe and bassoon. In 1985 we inaugurated a concert series in the Philadelphia area, changed our name to The Philadelphia Renaissance Wind Band, and became a non-profit organization. Since then, we’ve concertized locally, toured across the country, in Europe and South America, changed our name to Piffaro, and released close to 20 recordings.

2. Where does the name Piffaro come from?

When we signed a recording contract with Deutsche Grammophon’s Archiv Produktion label in the early 1990’s, they felt that our then-name, The Philadelphia Renaissance Wind Band, was too long and localized and asked us to come up with another. We settled on an old Italian word from 15th/16th centuries which translates roughly to “wind player.” In 16th century Italy, Robert Wiemken, one of our founding members and our Artistic Co-Director, would have been called Roberto Piffaro, “Robert the wind player.” The word could also refer to a double reed instrument, the shawm, so technically Robert would have been “Robert the shawm player.” The name made sense given that we are a wind band and are wind players.

3. What kind of music does Piffaro specialize in? Do you only play “early” music?

The focus of our repertoire is Renaissance music from the late-15th through the mid-17th centuries. On occasion, however, we’ve performed contemporary music. In 2008 we commissioned a Philadelphia composer to write a full-length Vespers in the Lutheran tradition for a chamber choir and our instruments. It was a gorgeous work that we subsequently recorded and have performed a number of times with various chamber choirs. Just this past month we were invited to perform a new work by a composer at The Curtis Institute in Philadelphia, written for early instruments, a saxophone quartet and a soprano — quite an interesting combination to say the least, and a unique experience for us!

4. How many Washington Revels performances has Piffaro been part of? Do you have a “favorite” Christmas Revels production?

We’ve been involved in 10 Washington Revels productions to date and have enjoyed every one of them. It’s hard to pick a favorite but one that stands out in our memory is the “Sun, Moon and Stars” show (“Celestial Fools,” 1992). Another was the Leonardo da Vinci production (“Leonardo’s Workshop,” 2009). But they’ve all been very high quality and a pleasure to be a part of.

5. What instruments do Piffaro members play — can you find these at your local music store?

In addition to the shawms and dulcians we mentioned before, we also collectively play sackbuts, recorders, krumhorns, bagpipes, lute, guitar, and various percussion instruments. None of these are available at the local music store! They are all made by individual instrument builders in the US and in Europe. Sometimes we can wait 5 years between order and delivery.

6. How many musicians are part of Piffaro? Can you tell us about the musicians who will be playing in this year’s Christmas Revels?

We’ve been an ensemble of 7 for most of our history since 1990. However, we’re now at six with the loss of one of our members fairly recently. We’re looking to return to 7 in the near future. Along the way, we’ve been cultivating younger players and frequently add one or two as guest artists and maintain a roster of substitutes because we can’t always get the main core of the band. For this year’s Revels we’re drawing on that sub list with two people we’ve used often and who have performed with us for Washington Revels in the past — namely, Laura Kuhlman and Liza Malamut. For this year’s Revels appearance, we also have a new sub with us, Nathaniel Cox, who brings the cornetto into the mix, an instrument we don’t usually have in Piffaro. He’ll be a good addition to the ensemble.

7. How did you find your way to early music, and what are some of the challenges of playing historical instruments?

The exciting challenge for all of us in playing these instruments and in playing early music in general is that we have to be historians, musicologists, and arrangers, as well as performers. And it helps to know how to make reeds, and how to do minor repairs and adjustments on the instruments.

8. Since you keep coming back to The Christmas Revels, what do you enjoy most about being part of these productions?

I would say the high production values and professional quality of the chorus and acting, together with the excellent stage directing of Roberta Gasbarre are the main draws for us. In addition, the camaraderie and the many friends we’ve made over the years keep pulling us back. We’ve always been very welcomed and feel at home with the Revels family in DC. 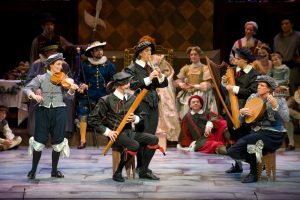 9. We understand that Piffaro has its own Renaissance costumes? Do you often perform in costume?

No, we don’t often perform in costume. We have several sets of costumes that we’ve had made for us, but for specific theatrical productions that we’ve built ourselves and produced over the years. We feel that a non-theatrical concert performance of Renaissance music should not require costumes any more than a concert of Mozart’s symphonies, for instance, would demand powdered wigs. It’s the music that we want to set as the focus in our concerts rather than any visual spectacle. So, we reserve our costumes for theatrical productions, such as The Christmas Revels, and we’re happy to use them in these cases.

10. Where else can we hear Piffaro perform? Where can we learn more about Piffaro online?

Piffaro has a concert series in Philadelphia and performs in other cities as well. We will be back in DC in March, performing with The Folger Consort. For more information about Piffaro, you can go to our website, www.piffaro.org.

Hear and see Piffaro in our 2018 Christmas Revels preview video: