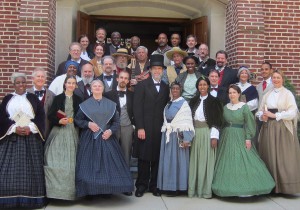 The ensemble performs regularly at Washington area historic sites and concert venues, including a recent appearance as part of the 150th anniversary of the Emancipation Proclamation at the National Archives. Other Heritage Voices performance highlights include appearances at the 150th anniversary of the first inauguration of President Abraham Lincoln, President Lincoln’s Cottage along with the Roustabout String Band, Fort Ward Park in Alexandria, Virginia, “Life in Civil War Alexandria: A 150th Commemorative Event” with the Federal City Brass Band, Glen Echo Park and as part of the annual Maryland Heritage Days, and many more historic sites. You can also hear members of this group on Washington Revels’ recording, Hard Times Come Again No More, as well as on the soundtrack of the documentary film, Life in a War Zone: Montgomery County during the Civil War 1861-1865. 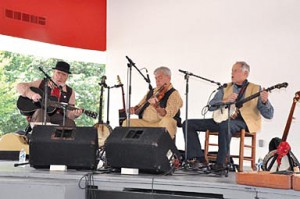 The band, made up of Chris Romaine (fiddle and banjo), Lars Hanslin (vocals, banjo, guitar and banjo-uke), and Bruce Hutton (vocals, guitar, mandolin, banjo and banjo-uke), never fails to entertain with their engaging and interactive style. Known as one of the finest dance bands for squares and contras, Roustabout has played for dances and performed in concerts from Florida to New Hampshire.

The band has been featured at many festivals, including Pinewoods (Plymouth, Mass.), Fiddle Head (Ashville, N.C.), Chesapeake Dance Weekend (Annapolis, MD), The Washington Folk Festival, The Takoma Park Festival, and numerous events sponsored by the Country Dance and Song Society. 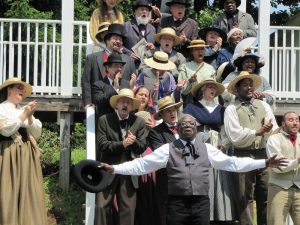 For more information about Washington Revels Heritage Voices, and to explore hosting a performance at your site, contact Colin Bills at cbills@revelsdc.org.