The Adventures of Reveler Mike Matheson!

Mike Matheson is no stranger to the Revels stage. You’ve seen him perform in many Christmas Revels productions, sung along with him (and his trusty concertina) during Pub Sings, and heard him direct and perform with Maritime Voices. Mike has been closely involved with Washington Revels since 1987 and has directed Maritime Voices since it formed in 2008. And wow, does he have some great stories to share with us during our “Washington Revels at 35” Retrospective: so many, in fact, that we thought we’d devote a whole blog post — in Mike’s own words — to these memorable vignettes from years past: 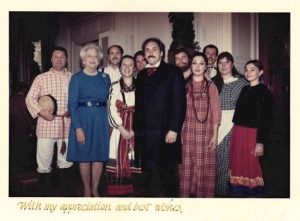 “In our 1991 Christmas Revels, we partnered with a Russian folk troupe, the Dmitri Pokrovsky Ensemble, and it occurred to me that, with the recent end of the Cold War, the White House might be interested in featuring us in their annual Christmas celebrations. I was working at the State Department then, so I contacted the White House and persuaded them that such an event would be good for US-Russian relations. They agreed that a small group of Revelers and Russians could provide the entertainment at an annual Christmas party thrown by First Lady Barbara Bush, at which a group of local students traditionally formed the audience. Naturally Dmitri was thrilled to do it. The program worked out fine — Mrs. Bush was very cordial and appreciative, but even more interesting was the process of getting clearance and admittance for a group of costumed Russians into the inner sanctum and schedule of the White House.” 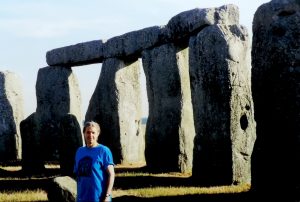 A Musical Tour of England

“In July 1996, Mary Swope and I organized a musical tour of England by a group of Revelers, at which we performed in various locales that had special connections with Revels traditions. This included: London, where we sang some traditional pub songs at a Victorian event and at the Bull and Bush Pub; Oxford, where we sang and danced with local Morris men in an evening of pub crawling; Salisbury Cathedral, where (in Greg Lewis’s absence) I led the Lord of the Dance; Stonehenge, where we were allowed into the ruins at dawn to sing Hail to the Moon [readers may recall this photo of Mary at Stonehenge, which Barry Galef shared with us on Facebook]; and Cornwall, where we taught the Mayor of Padstow the correct version of the Padstow May song! Great fun and great immersion into the English customs we have been celebrating.” 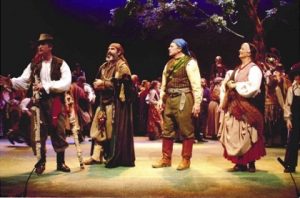 The Saga of the Village Cripple

“In one of the rehearsals for the 2003 Roma Christmas production, I foolishly attempted an athletic Serbian dance step and blew out my knee. Roberta was kind enough to keep me in the production as the Village Cripple and had period crutches made for me, on which I hobbled across the stage throughout the performance. As it turned out, I was on crutches for several months, and went through two operations in which the remains of my ACL were replaced by a graft. (But I was back on skis the following winter!) What we do for Revels!”

What we do for Revels indeed — thanks for all that you do, Mike, and for sharing these three memories with us!

Washington Revels at 35
Submit your favorite Revels memories to our 2018 retrospective.