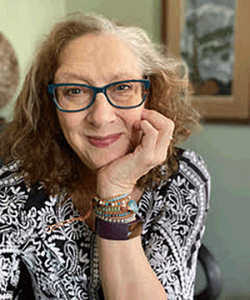 Roberta Gasbarre is artistic director for Washington Revels as well as stage director for the annual Christmas Revels. A recognized  leader in arts-based learning; her primary interests are in mixed forms, new works, large community celebrations, chamber musicals, theatre for social change, heritage arts, and theatre for young audiences. Since 1999, Roberta also serves as a Museum Specialist in theater and the Director for Smithsonian Institution’s Discovery Theater, writing, directing and producing over 350 performances for 50,000 people each year; touring shows, school residencies, and shows on the National Mall.

Her professional credits include work at most Washington DC-area theaters including five years respectively at Arena Stage’s outreach company Living Stage (Production Coordination) and The Shakespeare Theater (choreography and movement.) Her work has been Helen Hayes nominated numerous times and two of her productions have earned Helen Hayes awards: A Dance Against Darkness: Living with Aids (Co-director) & Quilters (Assoc. Director/Choreographer.) Roberta’s choreography, movement work and directing were seen at such venues as Roundhouse Theatre, Woolly Mammoth, and the Washington Jewish Theatre. Fluent in sign language, she also served on the faculty at Gallaudet University and was on the leadership team for the historic world conference and festival, Deaf Way I.

Roberta has taught acting, movement and period style in workshops or classes at such institutions as American University, UMD College Park & Baltimore, Wolf Trap and through Kaiser Permanente’s AIDS and health education initiative. She loves working with young performers and has done so at George Washington University (Hair & Pippin) and at Montgomery College Rockville and their Summer Dinner Theatre program since 1991 on shows from Candide to The Who’s Tommy.  In 1999, Roberta became a Museum Specialist in theatrte and the Director for Smithsonian Institution’s Discovery Theater, writing, directing and producing over 350 performances for 50,000 people each year; touring shows, school residencies, and shows on the National Mall.

Roberta received her BA from the Catholic University of America and MFA  from Towson University, specializing in interdisciplinary world theatre.  She lives in Silver Spring, MD.  Son Jamie is a musician and also works in video, photography and sound; and daughter, Caelyn is in the video game industry, writing, coding and performing  interactive media in Boston.