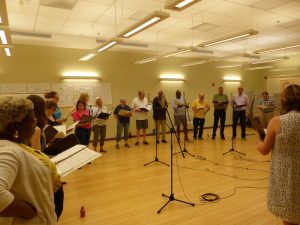 During the sesquicentennial of the American Civil War (2011-2015), Washington Revels formed several groups to research and “bring to life” the varied traditions that made up nineteenth-century musical life in this country, from shape-note tunes, to political ditties, to traditional spirituals. So when Jackie Streker of the George Washington University Museum approached me about recording some music for its upcoming “Songs of the Civil War” exhibit, I jumped at the opportunity to gather the forces and learn some new tunes.

A few months ago, I visited Jackie at the museum in order to look at the sheet music and the eventual exhibition space. She showed me copies of several pieces of beautifully decorated sheet music and a couple of song sheets and we talked though the ones that she was interested in including on listening stations throughout the exhibition. In total, there would be five recordings needed — two of them were to be drawn from our 2011 recording entitled Hard Times Come Again No More (“Was My Brother in the Battle?” and “The Battle Cry of Freedom”). 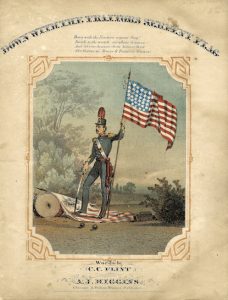 In addition to the recordings from the Hard Times CD, Jackie asked us to record three new pieces: “Wanted!—A Substitute,” “Down with the Traitors’ Serpent Flag,” and “The Drummer of Antietam.” If these titles are new to you, that’s no coincidence. They were new to me, too, and they’re certainly not on any list of the Civil War’s “greatest hits.” Rather, these songs were parlor pieces written to be performed in the home. And while we don’t find them in songbooks or hear them in film soundtracks, compositions like these can show modern listeners how music helped everyday Americans process the war in all of its complexity.

For example, the song “Wanted!—A Substitute” sounds at first glance like a pro-Union call for volunteers, when in fact it is a scathing criticism of the Enrollment Act of 1863. This act allowed men who had been drafted into military service to either purchase an exemption or provide “substitutes” who would fight in their place — a system that was disproportionately advantageous to affluent members of society. Washington Revels Heritage Voices tenor Greg McGruder and pianist Jennifer Cutting (who many of you saw and heard in our recent May Revels) really brought the song to life joined by the full chorus on the refrain. 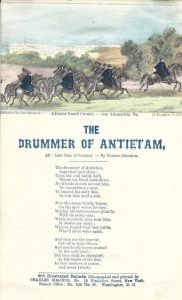 On May 21st we gathered at the Washington Revels Office along with Jennifer and  recording engineer Jonathan Charry to record this and the other two pieces. The Heritage Voices singers quickly learned and shaped the new tunes, and we recorded them on the spot. The second piece we recorded, “Down With the Traitors’ Serpent Flag,” is a spirited four-part “political” parlor song with these rousing words as the recurring refrain:

Down with the traitors’ Serpent flag
Death to the wretch o’er whom it waves
And let our heaven born banner float
O’er freemen’s homes and traitors’ graves.

In contrast, “The Drummer of Antietam,” is a sentimental ballad which came to us as a song sheet — a single printed sheet, usually six by eight inches, with lyrics but no music. Song sheets presented new lyrics to familiar melodies — in this case, the words were to be sung to the famous Irish tune “The Last Rose of Summer.” So, my job was to find the tune, match up the new lyrics with the tune, and then write it out for Heritage Voices soprano Jennie Weyman and Jennifer Cutting as a starting point for their final interpretation. You will need to visit the exhibition to hear this wonderful performance, as well as the others, after it opens on June 15th.

You can see the GWU Museum’s exhibit, “Songs of the Civil War,” from June 15-December 22.
AND on Saturday, October 5, Heritage Voices will perform a concert of music from the Civil War era at the museum; you can also take a special tour of the exhibit! See Concert Details.
(Note: the October 5 concert had originally been scheduled for July 27.)