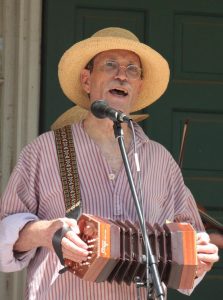 Mike Matheson with his trusty concertina.

This year marks the 10th anniversary of the creation of the Washington Revels Maritime Voices. During that time the group has performed a repertoire of more than 80 songs on more than 70 occasions in more than 30 venues in the Washington and Baltimore areas. Why has maritime music been such a success for Revels?

First of all, this region has a strong maritime tradition, dating back to the 18th Century. The Port of Baltimore has long been a major center of maritime commerce, the Chesapeake a thriving fishing community, Washington the headquarters of the U.S. Navy, and the C&O Canal a channel of commerce to the ports of Alexandria and Georgetown. Major naval battles have been fought up and down the Chesapeake. All of this has produced a rich and varied tradition of maritime and canal music, which we have been very happy to draw upon, and one which has a natural appeal to audiences in this area.

Second, there are many wonderful performance venues in Washington and Baltimore which embody or reflect all this tradition and history, and we have gladly made good use of them. For example, we have performed at the opening of maritime exhibits at various museums around town: the Sant Ocean Hall at the Natural History Museum; the permanent “On the Water” exhibition at the American History Museum; the “Sargent and the Sea” exhibit at the Corcoran Gallery; and the “Pirate Ship Whydah” exhibit at the National Geographic Museum. 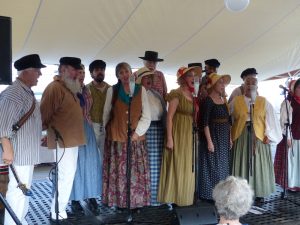 Performing aboard the USS Constellation in Baltimore

We have performed regularly at the Naval Heritage Center, both at the annual Blessing of the Fleet (with the U.S. Navy Band) and at two Capital Maritime Music Fests which we helped organize. We have performed aboard historic ships, such as the USS Constellation in Baltimore Harbor; and at historic venues, such as Fort McHenry (on the 200th anniversary of the 1814 battle) and the Great Falls Tavern on the C&O Canal.

Third, there are a number of major annual folk festivals in the area, at which we have been pleased to perform: the Folklore Society of Greater Washington’s Washington Folk Festival at Glen Echo; FSGW’s Mid-Winter Festival; and the Takoma Park Folk Festival. These have given us the chance to introduce folk music enthusiasts around the area to our maritime folk traditions and to Revels in general.

Fourth, the music of the sea and the inland waterways is a rich and vibrant source of folk traditions that have a broad appeal to audiences. We have done our best to present that music and the communities that produced it in an authentic style. We use traditional costumes and traditional instruments, and try to embody the people and times from which this music arose. 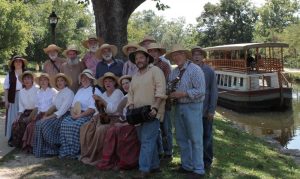 After a performance at the C&O Canal

Fifth, this music is so much fun to perform, and the people we represent are so much fun to present, and we hope this comes across to our audiences so that they can share in the experience. We try hard to embody the common sailors, the women of the ports, the men and women of the inland waterways, in a way that makes the music and traditions come alive for the folks who come to see us.

Finally, and most important, we have had such a wonderful and talented little community of people working to put all this together: singers, musicians, narrators, costume folks, Revels staff, and volunteers. What a joy it’s been to work with and celebrate with this group!

And so ten years have passed quickly and joyfully. Needless to say, we’re looking forward to starting another ten years of new and exciting performances, and many after that! Come join us!