Mike Matheson leads a song at the C&O Canal.

This past Winter, we sailors and womenfolk of the Washington Revels Maritime Voices got our annual voyage underway by performing center stage at the Folklore Society of Greater Washington’s annual Mid-Winter Festival — and as all hearty sailors would do when pulling into port, we concluded February by conducting our usual raucous party. We’ve since been sailing through the Spring to some old familiar shores (but bearing new musical “cargo,” if you will!).

In March we put together a new program featuring songs of American origin, from the shores of New England, to the Chesapeake, to the islands of the South, and to the rivers and lakes of the great interior. We recently performed this in 19th-century costume at the U.S. Navy’s big annual Blessing of the Fleet at the Navy Memorial in April. We introduced the event with a set of sailor songs, followed by the U.S. Navy Band, and by the formal Navy ceremony with lots of flags and admirals. 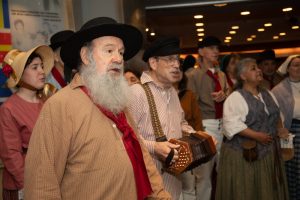 The Voices serenading while navy bean soup is served! Photo by Jeff Malet for the U.S. Navy Memorial

Then everybody moved into the Naval Heritage Center next door, where navy bean soup (courtesy of the White House mess) was served to all — and we serenaded the assembled diners with some lively sea chanteys. Finally, we forged ahead into the Center’s theater, where we performed the hour-long program of homegrown songs we had worked up. A long day, but fine Spring weather and a great event that we look forward to year after year!

Next up, after taking time off to join in the May Revels, we will reprise our American program on May 22 at the Friendship Heights Visitor Center, a free concert we are delighted to offer every year for the community crowd. As in the past, we will hope to engage this audience in singing along with the refrains, as all sailors aboard ship would do. And as in the past, we will illustrate the life and pastimes of the sailors, the boatmen and the women of the ports and canals — as lively and earthy as we can make it.

Come join us, all you Revelers, and get ready for the Summer voyage ahead!