This past Spring we asked the Revels community to share their favorite memories from the past 35 years in our “Washington Revels at 35” Retrospective. Longtime reveler Dick Kovar reminisced about his own path to the Christmas Revels chorus, and it was such a touching story about the joy of participating in this annual holiday celebration (as an audience members and a cast member) that we had to save it until closer to this year’s show. As we prepare to open this weekend, we hope you enjoy Dick’s look back at 35 years of Revels productions that have meant so much to so many! #RevelsDC35 #RenRevelsDC 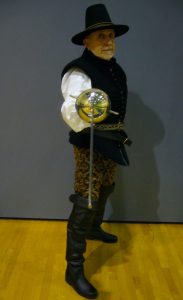 Dick in costume at a 2007 Elizabethan Revels rehearsal.

Dick and Carolyn Kovar and their daughter Carrie Boris have been enjoying The Christmas Revels since the very first Washington production opened at GW Lisner Auditorium 35 years ago. Carolyn had happened to hear “Lord of the Dance” being performed on the radio station WGMS by a very fine male singer, a Renaissance wind band, and what sounded like a theater audience. Intrigued, she listened until the conclusion, when host Dennis Owens announced that the singer, Jack Langstaff, would be heading a cast of talented Washington-area amateurs in a new seasonal production of medieval songs and dances. She ordered tickets; on a weekend evening the family waited amid snowflakes to enter Lisner; and at the end of a song-and-dance-filled Part One they got to follow Langstaff up the aisles singing “Lord of the Dance.”

After the Revels’ ritual singing of “The Sussex Mummers Carol” with the audience at the end of Part Two, Carolyn bought the Revels record at the gift booth, and soon the Kovars knew by heart all the Langstaff-compiled songs and readings that, in the Revels’ premier production, celebrated the old English customs of the Winter Solstice. In subsequent years they would enjoy songs, dances and legends from many different times and cultures, but “Lord of the Dance,” “The Sussex Mummers Carol,” and the peace round “Dona Nobis Pacem” were always worked into the Christmas Revels proceedings. Except for one year when the show sold out before they could get tickets, ever since that magical first night the Kovars have attended each of the Revels’ varied Christmas Revels productions and most of their annual May Day celebrations, too.

Dick Kovar, an untrained but enthusiastic amateur singer who had sung onstage in high school, college and in church and community choirs all his life, sang boisterously each Solstice season in the numerous singalongs that are part of every Revels production, and was frequently asked by audience members in the surrounding seats why he wasn’t up on the stage. As the years passed Carolyn and Carrie (both enthusiastic singers too, but even shyer than Dick) started urging him to audition. Dick longed to try but feared that his limited upper bass range and his lack of formal training wouldn’t pass muster for admission to the polished Revels troupe. By then in his 60s, he no longer felt able to follow the “Lord of the Dance” procession down the Lisner stairs at the midpoint of the show, and he still had a cigarette habit that shortened his breath and his upper vocal range, so how could he manage dancing and singing on stage? One year, though, he heard that the show would have a Russian theme and thought that his deep “Volga Boatman” bass might help win him a part. He shyly approached the producer, Mary Swope, only to find that the intense three-month rehearsal schedule required of chorus members would be incompatible with his Cold War office routine at the Central Intelligence Agency.

The following year, though, the Berlin Wall had fallen down and Dick’s job demands had fallen back to a pretty reliable 9-to-5 pattern. He chose for his Celtic Revels audition “The Minstrel Boy” (pitched low) and “Lord of the Dance” (in Jack Langstaff’s key) and, amazingly, was not only accepted but chosen to play Father Christmas in the traditional mummers play (perhaps because his voice was loud enough to penetrate the massive wicker basket that covers every Irish mummer’s head and upper body). 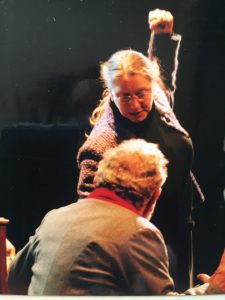 Since that debut in 1993, Dick, whose 90th birthday is next February 14th, has played in most of the annual shows, nearly always as a dancer as well as a singer, in several more shows as Father Christmas, and once as a cackling Jacob Marley in a Victorian Revels. His daughter Carrie joined the Backstage Revelers while in high school, and quickly became the show’s properties manager and thereafter as a part-time office assistant.

Asked what he likes most about Revels, Dick replies, “I love it all, but the first best thing is when our directors bring us all together at Lisner for the final rehearsals and opening night –– the chorus, the professional actors, the teens and children (who always steal the show), and the technical staff –– and we see what we have wrought over the past six months. And that’s when you realize that you love everyone connected with the show, and that you are a community of performers bringing the Revels theme – joy, health, love and peace –– to the larger community of the Washington area.”

And the hardest part? “Memorizing the music and learning to put it over like professionals. It’s a different production each year, so there’s at least a dozen songs to learn, often in foreign languages. But that just makes it better when at the end you finally find that you know everything by heart, and you are actually living your role onstage in front of thousands of happy people.”

Carolyn, whose finely-tuned ear made this long-running enjoyment possible for the family, says she wishes she could use ear plugs at the dinner table each fall, because the conversation from September through December is dominated by Dick and Carrie’s insider talk about the show’s progress. But she is always down front on opening night, and then again at a matinee the following weekend in the upper tier (which offers a panoramic view of the show) along with Carrie, granddaughter Caeli Boris, and the extended Kovar-Boris family. And the reissued Jack Langstaff recording of that first medieval Revels show is the first thing she puts on the CD player each Christmas season.