Susan Swope and her wife Shirley live near Gettysburg, PA and have been attending The Christmas Revels in Washington for nearly 20 years. In the Spring of 2018, Susan took a chance during our Gala auction and submitted a winning bid to appear as a guest performer — in full costume and makeup — in one show of our 2018 production, singing on all audience sing-alongs and participating in various scenes on stage. This is her story. 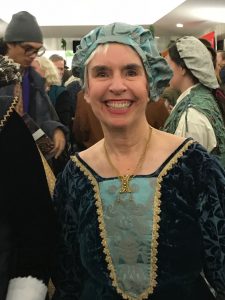 This morning I awoke from another dream that I am still with you, onstage and back, singing and chatting, and milling about amid all the excitement.

Shirley and I first learned of Revels perhaps 35 years ago, when we found a used LP of the original Boston Revels at Second Story Books. Over the years we would be tantalized by Mary Cliff’s playing of a Revels piece on her Saturday night folk music show, “Traditions.” Shirley would imagine staging our own Revels with the chorus we belonged to. And I would point out how unrealistic that was. We came to your first Nordic show in the 1990s and have been coming ever since. Usually I take advantage of the early ticket priority for donors and organize a group. Throughout all those years, I harbored a fantasy of being in The Christmas Revels, but I don’t think I mentioned it even to Shirley. It wasn’t realistic: I would never pass the audition, and I live two hours away.

I have never attended your fundraising Gala. But last Spring, I idly opened an email promoting the many auction items available — and the chance to earn a spot in one of the upcoming Christmas Revels performances caught my eye. I turned 70 last January and had vowed to celebrate that milestone all year. I noticed that bids could be placed from afar. My heart began to race. This was tempting! Without consulting Shirley, I did a quick calculation of what this opportunity might be worth, what I could afford, and what others might bid — and emailed my bid. 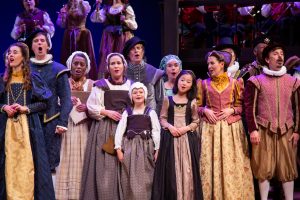 Can you spot Susan in this audience sing-along? Photo by Ryan Maxwell Photography.

I am deeply grateful to all of you for making my dream come true. Everyone reached out to me and pulled me into your circle. Naming those who helped me means I will probably leave someone out, and I apologize: I remember you even though I may not remember your name:

Executive Director Greg Lewis was meticulous in working through all the details: promising what I would get from the Revels, and outlining my obligations.

In September, I came to the offices and met the staff. Costume Shop Manager Sandy Spence chose a costume for me and I met her team, the first welcoming committee.

I was given access to the production website (an event organizer’s dream come true). I made myself a binder and read the script. When I had trouble downloading the audio clips, IT Director and Assistant Music Director Will Wurzel walked me through it. I made a playlist and began singing along in my car. 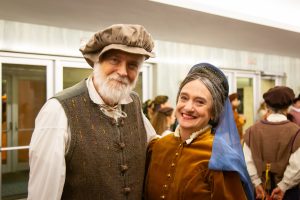 Diane and Terry Winslow in costume for their walk-on roles. Photo by Ryan Maxwell Photography.

I came to your pre-Thanksgiving Sunday rehearsal, where there was a warm welcome, a nametag for me and T-shirts for both Shirley and me. Company Manager Susan Lewis gave me stage charts and a running order marked with the scenes for which I would be on stage. I met Diane and Terry Winslow, who had also won performance spots.

And I met my stage families! From the audience, I had noticed that you chatted with one another on stage and wondered what that was about. Now I knew. I had a backstory! (Yes, I had more than one stage family. So that I could be in both the death scene and the mummers play scene, Susan had made me a townswoman who served as lady’s maid to chorus-member Jan Elicker,”husband” Jim Harkless and their stage children for the first half. They gave me the day off to be with my town family, Kerstin Zurbrigg and David Potts-Dupre, for the Queen’s entertainments in the second half.)

In the midst of her many other responsibilities, Susan was in touch with me several times between then and the tech rehearsals, keeping me posted on changes in blocking, when and how to get into the auditorium, and other important details. I had noticed some Revels magnets on cars in the parking lot, and she connected me with Business & Development Director Patti Knapp, who made sure I could buy some.

Volunteer & Education Manager Grace VanderVeer took the time to sit with me in the audience on Wednesday night so that I could figure out where I would be.

I haven’t worn makeup since I was 18. On Thursday night again Susan gave of her time, walking me through each makeup step (there are eight, I think, and I was capable of doing only the first three on my own). The makeup women were just as friendly as everyone else.

The costume team was exceedingly friendly and helpful. And I had my own chair! 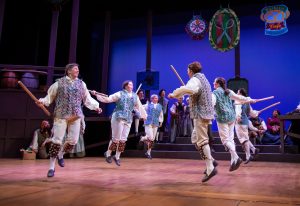 During the rehearsal, I did my best to figure out where I should be and how to get there, and my stage families did all they could to help.

I relished the chance to see Artistic Director Roberta Gasbarre and Music Director Betsy Fulford at work, bringing the quality ever higher. (So did Shirley, who was invited to be in the audience for the rehearsals.)

On Sunday, as we stood behind the curtain for the opening scene, the noise of the crowd in the auditorium was intoxicating. Thank goodness I have been in choral performances: my knees didn’t give way when the curtain opened.

The performance flew by. I even got to play with the Morris women during the pub scene! I did my best to find my families on the monitor before stepping on stage, and they always drew me in. It wasn’t until late in the mummers play that I realized the townsman in the brown hat with whom I had been having delightful exchanges was not in fact Dave the butcher, my brother (or was it brother-in-law?). Thanks, chap in the brown cap!

And your kindnesses were not over with the performance. Jan was good enough to pose for pictures with me in the lobby afterward, and actor Danny Pushkin stayed in character to interact with my most voluble friend. Even after that, when Shirley couldn’t find me, Will Wurzel came looking. Roberta even complimented me on my death scene! And as we were driving home, Susan Lewis called to say she’d found my binder.

I was born and raised in Gettysburg, and still live nearby. Growing up there, it was natural to learn the basics of the famous battle, but the military side of it has never interested me. But I had grown up with a recording of Civil War tunes and that music has always touched me. 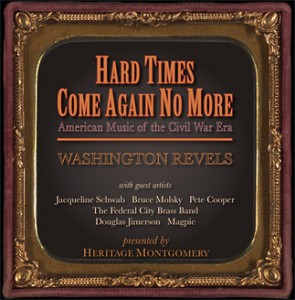 Six years ago while browsing the merchandise during intermission, your CD Hard Times Come Again No More caught my eye and I bought it. Of all things, that is what I played while decorating our tree that year. Listening to your CD, I wondered for the first time what the experience had been like for Gettysburg townsfolk. And I got an idea. For the next six months, I put every spare minute into researching and planning a worship service for the Unitarian Universalists of Gettysburg (UU’s for short). I enlisted the help of our choir and called it “What Would UU Do?” It was stories of the Gettysburg civilians, interspersed with Civil War tunes.

Now one of the things I do to keep myself entertained in my retirement is to give walking tours of the town, telling some of those stories. I am a Gettysburg Licensed Town Historian. This is another thing for which I have Washington Revels to thank.

Thank you for a peak experience. I wish you all, both great and small, a happy bright new year!

If you think you might also enjoy being a guest performer in a Christmas Revels production, stay tuned for future news: Washington Revels intends to make the auction of a guest performer slot an annual event every Spring!