A Medieval Celebration of the Winter Solstice 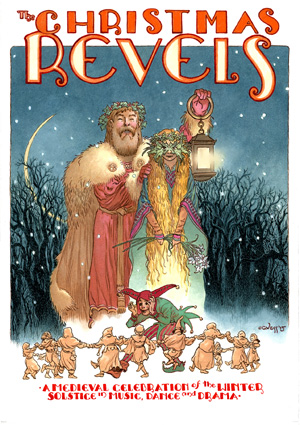 Revel with us and with our beloved king, a mysterious woodland queen, a pair of fools, and an unexpected guest. As the Winter Solstice calls us all together, meet us in a special place that straddles the majestic and the mythical realms. The townspeople gather with court and forest folk, new and old traditions find common ground, and a deeper community emerges. Join us and find the true heart and spirit of the holiday season as we bid goodbye to the old year and celebrate the birth of the new.

Join our cast of over 100, ages 8 to 85, for this one-of-a-kind evening of seasonal celebration and merriment. Sing along and dance in the aisles with us, and join the over 10,000 people who make our Christmas Revels part of their holiday tradition each December!

FAMILY FRIDAY NIGHT:
25% off Youth tickets on December 11 at 7:30pm
Save money and bring the whole family on Friday night!!
Please Note: Discounted Youth tickets do not count toward 10-ticket and 20-ticket thresholds for purposes of group discounts. 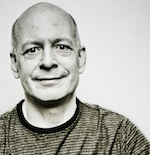 Audiences of all ages and backgrounds have enjoyed Mark Jaster’s  kinetic humor, playful interaction, musical wit and inventive imagination. His skills in mime were developed in training with 20th-century masters Marcel Marceau and his teacher, Etienne Decroux, and through studies in the LeCoq pedagogy of Theatrical Clown. He now frequently teaches (American Academy of Ballet, Shakespeare Theatre, Maryland Opera Studio, University of North Carolina School of the Arts), consults on issues of mime and movement (Centre Stage, Round House Theatre, Adventure Theatre, Ford’s Theatre, No Rules Theatre, Constellation Theatre) and regularly conducts artist residencies with Elementary Schools. Since 2006, he has co-directed Happenstance Theater with his wife and partner, Sabrina Mandell, devising and appearing in critically acclaimed collaborative, original works of “Visual, Poetic Theater.” In addition to frequent performances with Washington Revels, Mark has also made many appearances in the Maryland Youth Ballet’s Nutcracker, with the Cambridge Christmas Revels, and at The Maryland Renaissance Festival. Mark has been a proud member of The Big Apple Circus’ Clown Care Unit since 1996, performing at the Children’s National Medical Center as Dr Baldy. 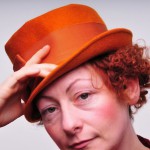 Sabrina Mandell  spent several years working on traditionally rigged schooners, sailing up and down the East coast of the United States. She stopped for a spell in Charleston SC to study Art History.  Sabrina is the founder and Artistic Co-director of Happenstance Theater. She has written, produced and performed prolifically since the company’s founding in 2006.  As the company’s manager she has secured grant support and as the costume designer she was nominated for a Helen Hayes Award for Cabaret Macabre.  Sabrina performs regularly with the Big Apple Circus’ Clown Care Program in DC and Baltimore. She has also taught Theatrical Clown and Physical Comedy at the Shakespeare Theatre, Everyman Theatre in Baltimore, Round House Theatre, Duke Ellington School of the Arts, and the University of North Carolina School of the Arts. Sabrina is also a visual artist and poet. 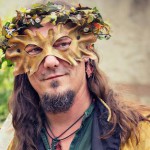 Master, mentor, mummer, and merry-maker in the lively subculture of the Mythic Arts, Shane Odom is a true Renaissance man. His life-long studies of myth and folklore have given him both a scholarly and experiential passion for masks, mumming, and performing as an expressive art, while a love for nature and science has been the inspiration for much of his artistic designs. His extensive knowledge of the mythic traditions and a focus on the image known as the “Green Man” has led him to creative partnerships with a number of events, publications, and industries. His experiences include jewelry production, cultural arts, set design, metalsmithing, children’s toys, faux finishing, and leather work. As his primary art and career, he and his wife and artistic partner, Leah, run an arts and crafts studio in which they create fantasy-style masks and accessories. They sell their wares, blow bubbles, and peform at many events on the East Coast, including Spoutwood Farm Fairie Festival, Maryland Faerie Festival, New York Faerie Festival, Maryland Renaissance Festival, and FaerieCon. 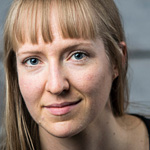 Gwen Grastorf is a performer and actor in the DC metro area.  She is a company member with Happenstance Theater and has collaborated with them since 2007 on numerous productions. Gwen is also as an Associate Artist with Faction of Fools and Constellation Theatre, and has worked around town with Forum Theater, Taffety Punk, We Happy Few, Rorschach Theatre, and the Source Festival, among others. Raised in Frederick, MD, Gwen has a strong background in dance and music and is happiest when working on physical, ensemble-based shows. She holds a B.A. in theatre from the University of Maryland, College Park, and is continually taking classes and workshops to expand her abilities. 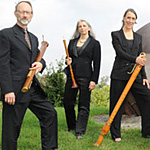 Piffaro, The Renaissance Band delights audiences with highly polished recreations of the rustic music of the peasantry and the elegant sounds of the official wind bands of the late Medieval and Renaissance periods.  Its ever-expanding instrumentarium includes shawms, dulcians, sackbuts, recorders, krumhorns, bagpipes, lutes, guitars, harps, and a variety of percussion — all careful reconstructions of instruments from the period.

Under the direction of Artistic Directors Joan Kimball and Bob Wiemken, the world renowned pied-pipers of Early Music present an annual subscription concert series in the Philadelphia region; tour throughout the United States, Europe, Canada and South America; and appear as performers and instructors at major Early Music festivals. Recordings are a significant part of the ensemble’s work, and 16 CDs have been released since 1992, including 4 on the prestigious label Deutsche Grammophon/Archiv Produktion label. 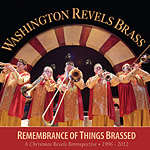