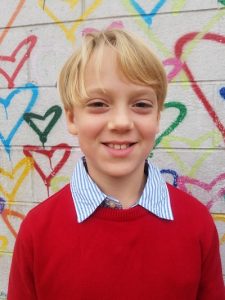 Arthur Dalton is in third grade in Alexandria City Public Schools and is an alumnus of Beverley Hills Church Preschool. He is a history buff and has especially enjoyed following Alexandria Archaeology’s discovery, excavation, and conservation of the ship found in Old Town last year. He dressed as Ron Weasley for Halloween, noting that Ron goes out of his way to help his friend Harry, but that Ron’s behavior often leads to other problems…and occasionally to answers.

Arthur’s love of music was encouraged from an early age by many members of his community through Music Together classes, preschool teachers and parents, and as a member of the Cherub and Canterbury choirs at Christ Church. He is thrilled to be part of this Christmas Revels and to learn some French and Morris dancing. Arthur wishes everyone celebrating with the Revels this year a Joyeux Noël and asks that you cross your fingers for snow. 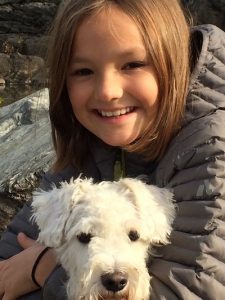 Sophia Marie Lemaire McCormick is almost 10 and she is excited to perform in her first Christmas Revels performance. She enjoys playing soccer and chess with her friends and hiking with her family. Visiting Mama Steph and Papa John on their Farm in Virginia is always a thrill when horses and chickens need to be fed!

Sophia can also be an avid reader and spend a whole weekend with her nose in a good book. She enjoys spending time with her older brother Jack, tolerates her younger brother Matthew, and dotes on the family dog Charlie. 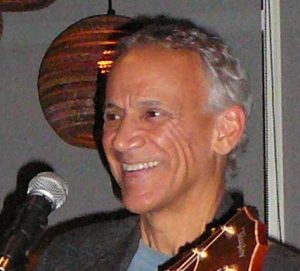 David has sung in a wide variety of styles and settings, most frequently accompanied by his guitar playing. In 2017, he made his opera debut as “Jim Crow” in the initial staging of a jazz/blues opera entitled Love Songs From the Liberation Wars. David is making his second consecutive Christmas Revels appearance. He has visited Quebec to hike, canoe and tour Montreal.

In 2011, David was nominated for a Montgomery County MD Arts and Humanities award for community building through musical participation for hosting hundreds of open jam sessions and dozens of free community coffeehouses in Garrett Park MD.

David, a manager at the U.S. Environmental Protection Agency, is a dedicated mentor to numerous younger professionals.  He loves to move – most frequently walking, hiking, biking, playing ultimate frisbee, or doing yoga. He delights in plant-based food, having been “veganish” for three decades. David sang during the first seven wedding ceremonies he attended. He hiked alone in northwest Italy in a long, but successful, search for the elusive and endangered Ibex. Having never been west of Orlando, Florida as a child, David took a two-month solo coast-to-coast road/camping trip to visit national parks and selected cities after graduating from college.