The Origin of the Gigue (Québécois Step Dancing) 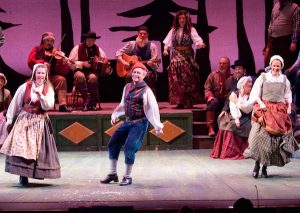 In Québec, step dancing is known as the gigue. The step dancing in this show is a style from the eastern part of Canada. It is one of a number of varieties of step dancing found throughout Canada. Step dancing originated in the British Isles. Its path to Canada began with the large Irish immigration between 1832 and 1847. As a port of entry, Québec City was first to feel the Irish influence. As French-speaking Canadians adopted the dance, colonists moving northward carried the gigue with them.

Various traditions have influenced the gigue. It is difficult to distinguish between the Irish and the Scottish influence in Canada, because these populations were in close contact before they arrived. It is, however, possible to identify certain dances, such as “Brandy,” danced in this show during the New Year’s Eve party, as being of Scottish origin.

There are significant variations in the gigue that reflect cultural differences. For example, the dance is quite different in the Outaouais region (near Ottawa) and Saguenay (in Québec, 120 miles north of Québec City). English-speaking dancers in Ontario and further west dance mostly in 2/4 and 6/8 time. Particularly in competitions, English speakers often dance a fixed suite of rhythms containing a clog (4/4), a jig (6/8), and a reel (2/4); the first step dancing in this Christmas Revels is an example of such a suite. In French-speaking Québec, on the other hand, the gigue is in 2/4 and 3/2 time; one example is “Brandy.”