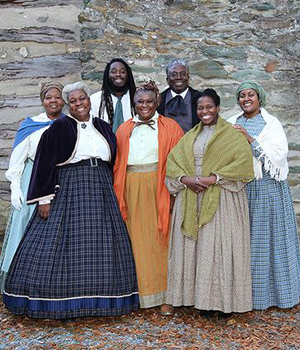 On Saturday, September 17, take a musical journey to the 19th century and hear songs and stories from the field, praise house, and battlefield. Learn about the music that sustained enslaved African Americans as they made their way to freedom, and hear the story of two sisters and their daring escape from bondage. Join Jubilee Voices for an interactive evening filled with songs, spoken word, tales highlighting local history, and more.

Jubilee Voices will present the story of The Pearl — the captured boat that was transporting escaped slaves to freedom in the north.  Passengers the included the Edmonson Sisters, who later became well-known figures in the abolitionist movement. The captured slaves were held in an infamous slave pen located in Alexandria, and a statue of the two sisters is now located on Duke Street. The story is especially fitting since the concert takes place near the statue, and near the location where the slaves were held captive.

Proceeds from this event will benefit Hunger Free Alexandria.