April 11 – Maritime Voices at Navy Memorial Blessing of the Fleets 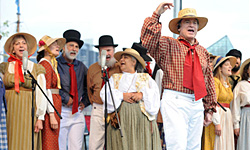 An annual tradition with maritime music, water from the seven seas, and navy bean soup!


The U.S. Navy Memorial hosts its annual “Blessing of the Fleets” each spring at the beautiful and majestic Memorial Plaza. Passed down through generations of sailors, fishermen, merchant mariners and navies around the world, this centuries-old ceremony is intended to safeguard fishing crews and ships from the danger of the seas through a traditional blessing given at the water’s edge. In this version of the ceremony, waters brought in from the world’s seven seas and Great Lakes are poured into and mingled with the waters of the fountains on the Plaza.

Beginning at 12:30 pm, on the Navy Memorial Plaza, the Maritime Voices will sing several traditional sea chanteys and the Navy Hymn, “Eternal Father, Strong to Save”, followed by music played by the U.S. Navy Band.  The formal ceremony will start at 1 pm.  After the ceremony, Navy bean soup will be served (to serenading from Maritime Voices) in the Naval Heritage Center just off the Plaza. Maritime Voices will then perform an hour-long program of songs of the sea – with a special historical theme in honor of the origins of the U.S. Navy Reserve in the early 1800s – in the NHC’s Burke Theater.

DATE/TIME: Saturday, April 11, 2015 from 12:30-4 pm.
Music by the Maritime Voices and the U.S. Navy Band starting at 12:30 on the Navy Memorial Plaza; the Blessing of the Fleets ceremony at 1:00; and a 1-hour Maritime Voices program in the Burke Theater in the adjacent Naval Heritage Center at 2:15.