A Visit With Mary Swope, Founder of Washington Revels 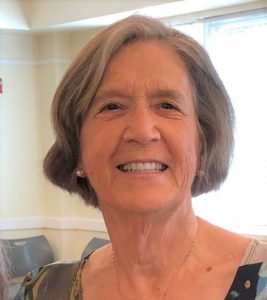 “My sister went to Revels in Cambridge and said, ‘Oh, Mary, this is something that’s just made for you!’ I said, ‘Sure, sure.’ But I went, and of course she was right.”

After seeing an early Revels show in Cambridge, Mary Swope figured she might audition to be in the cast at some point, but never imagined how tightly her life would become intertwined with Revels. In 1981, Jack Langstaff asked her to find a place in Washington, DC where Revels could perform. From then on, she “did everything in Revels that anyone could do”: office business, active recruiting, volunteer coordination, show production, and she sang in almost every Christmas Revels from the 1980s through the early 2000s. Since she left the organization in 2002, Mary Swope has often been referred to as the founder of Washington Revels, though she expresses some modest hesitancy with the title: “I felt that there were many people who founded the Washington Revels: [I was] simply standing on everybody’s shoulders.”

“There were so many things about Revels that were like a magnet to me. As I went on in Revels, I felt that everything I had done in my life prepared me to do this very job.”

From an early age, Mary has always been drawn to music and poetry. She was first exposed to folk music from many traditions while attending the Brearley School in New York, and went on to sing in various school and church choirs. This culminated in her knowing “an awful lot of the music [she] was hearing in Revels before [she] joined it.” After graduating from Radcliffe College and working as an elementary school teacher, she held a couple of publishing jobs in New York, including one in children’s book editing. She recalls, “I really liked the picture books because they were like poetry. The words were more selective… [and it was also more] dramatic because the page turns were like parts of a scene.”

Indeed, Mary is a prolific poet with decades-long ties to the Boston and DC poetry communities and the Folger Library. While she published a few poems in periodicals over the years, she was too involved in Revels to put in the time necessary for a larger publication. In December, her first full book of poetry “Phosphorescence,” a selection of her poems from the past sixty years, was published by Word Poetry. In a way, she has come full circle, as she was initially drawn to Revels not only because of the music, but also because of the poetry. She explains, “Jack Langstaff felt that poetry had a real role to play, and he always wanted to include some kind of poem in the Revels as well as the songs, stories, and little plays.”

“We’ve always had strong women in Washington Revels, and without the women we would have been very different.”

While coordinating with Cambridge Revels in the early 1980s, Mary was acutely aware that being a woman set her apart from the many men in artistic leadership positions. However, she believes that “Washington Revels has certainly always known that women are essential.” Throughout her narrative, she frequently highlights the Revels women she admires, including Andrea Jones Blackford, Mary Gene Myer, Betsy Fulford, Roberta Gasbarre, and Cambridge’s Gayle Rich. She thinks women may be especially important to Revels given that they “are often people-people,” and are able to work effectively to bring more folks into the fold. From the very beginning, many essential women volunteered for Revels around her dining room table, working to find an audience, develop a newsletter, and more.

“Revels performances ought to reflect the community in which the Revels takes place.”

One show that Mary fondly remembers was set in 19th-century DC’s historic Shepherd’s Alley. The alley housed some of the city’s poorest residents, many of whom were recent immigrants or descendants of slaves. The diverse cast came together to sing a mixture of parlor music, Civil War songs, and traditional African-American spirituals. Mary feels that this show was a high point in Revels history, given its pertinent social commentary on the need to recognize differences and similarities and come together as a larger community—a message that holds just as much weight today. She explains, “I think Washington, more than ever, needs to be healed and brought together: it needs to feel like one community instead of a bunch of communities.” She believes that Revels should be a cultural healing place, given its ability to open doors to a variety of people and traditions. She is especially pleased with how the organization has developed to become even more multicultural; for, as she puts it, “if you don’t change, you don’t live.”

“There are many, many things that Revels has to offer to many, many people… it can make people feel included, feel embraced, feel like one.”

Ultimately, Mary believes that the most remarkable aspect of Revels is the community and the culture of shared music that comes with it—a sentiment shared by many Revelers. She especially enjoys the post-rehearsal and post-performance gatherings in pizza restaurants where everyone knows and sings the same songs. The common repertoire, Mary thinks, fosters a cohesive community: “we have all those special songs that we know by heart, and we can always join together and sing them. … I hope that it works across all of the Revels cities: that many of the songs we sing they have in common, so that we have a marvelous repertoire of tradition that carries tradition even away from the stage.” She trusts that as long as the community has people willing to pour their hearts into the organization like she did, that Revels will keep going. There may be harder and easier times, but she concludes, “I think Revels will follow its star.”