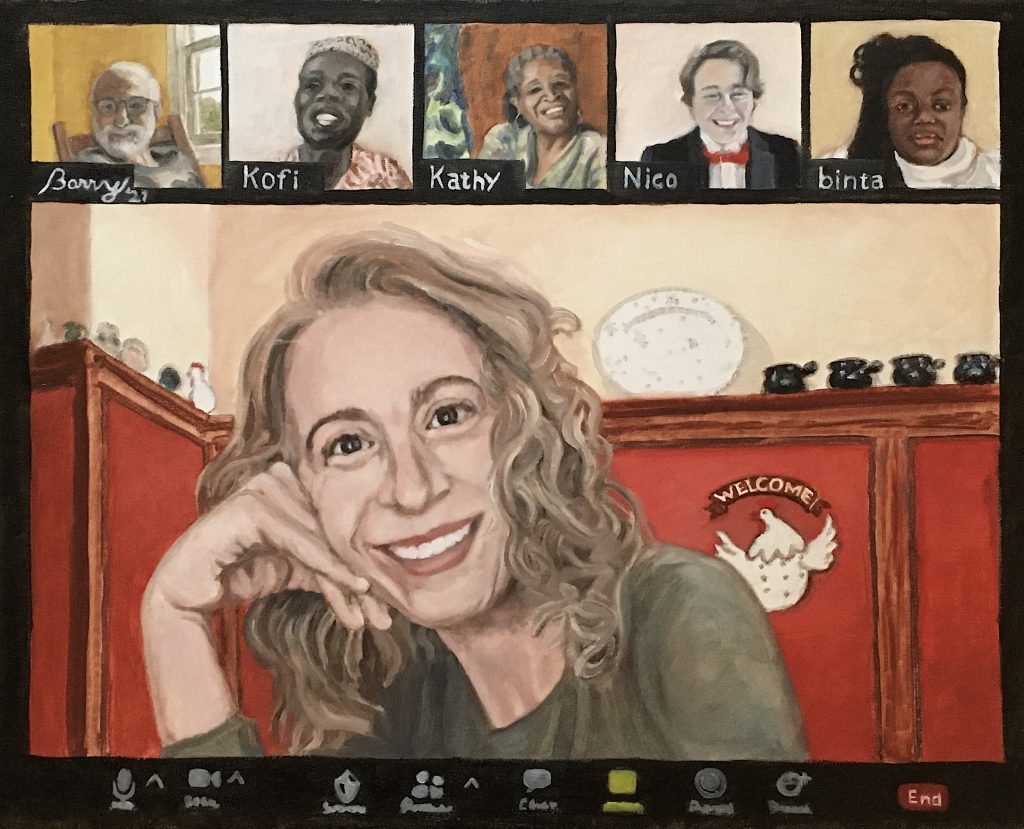 Painting of Jo leading the Daily Antidote of Song on Zoom. Barry Galef © 2021

Jo Rasi started working for Washington Revels in 2011, but she knew about it for even longer than she initially realized. She took her son, Nico, to see her friend and colleague, Steve Winick, perform in the Quebec Revels in 2008; but even earlier than that, her younger brother had performed in a Revels at the Emma Willard School when Jo was only five years old. In the lobby after the Quebec show, Jo heard Revelers singing the Boar’s Head Carol, which finally helped her realize it was the same Revels her brother had performed in: “I listened to that song here in DC and just felt this sense of everything coming together.”

Jo realized how special Revels was when she took her then two-year-old son, Nico, and he sat enraptured through the entire Christmas Revels. She found it serendipitous that after dropping Nico off for his first day of kindergarten a few years later, she passed by the Washington Revels office on Dale Drive just around the corner, so she decided to stop in and offer her arts administration experience. Since then, she has taken on a variety of roles in marketing, development, programs, and community engagement; she is now the Community Engagement Director. 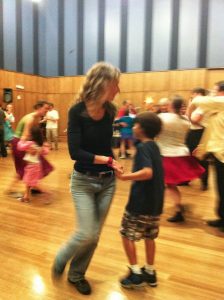 Jo has always emphasized the importance of the community side of Revels. She was drawn in by how her whole family “was not only welcome but could have a role,” and she says that “no matter where you are in life, there’s a space for you to be.” She works to continue this welcoming spirit through community engagement events, now virtually. She is proud that her work has “really managed to connect to so many people, so many communities. So we had service days, we had virtual singing… before the pandemic, there was dancing.”

Going virtual obviously posed some challenges to community engagement, but Jo stepped up to create what is now a beloved and ongoing virtual tradition: the Daily Antidote of Song. Jo is glad it “really touched people at a time when they really needed to be found or seen or heard or sing or whatever it was people needed.” She is especially proud that the song leaders “talk about how the  space is different for them than any other virtual space they sing in. They find community there too, so… all of the effort—and it is a lot of effort!—is worth it; it really does what it needs to do.”

Throughout our conversation, Jo talks about Revels collectively, being very humble about her own role as a director; she really prefers to highlight how important it is that Revels is all about working together. She says one of Revels’ strengths “is tapping into the energy of the people who are passionate about it, and then letting them ride with ideas that add layers onto what we already do,” so that Revels is constantly evolving based on community-led ideas and energy. She points to programs emerging during the pandemic and the anti-racism movement as recent examples of the way Revels constantly evolves based on the community’s ideas.

Jo loves the way different people bring different “flavors” to the Revels experience. She says her own flavor is her perspective that “when we are presenting anything, we want to make it in some way or another a growing experience or a learning experience; we want to make it accessible.” She tries to incorporate an “open-door, welcome to this thing you may never have gotten to experience or explore before” attitude to the events and posts she creates, to help satiate people’s curiosity and make them feel not just welcome, but engaged in the community.

Jo is glad to be part of a team of women who are leading Revels, because she believes many women have an “understanding of what it means not to be the dominant culture,” which can help them lead in a more compassionate way. She acknowledges that being a woman does not come with the same perspective of historical marginalization as, for example, being a person of color, but she is grateful that “Revels has such a full circle of women that have paved the way for us to have been wearing the lens of women all along.” In other words, being a woman in a leadership role in Washington Revels is normal; and that is something to celebrate!

“The work I’m doing now feels as if it has layers that it didn’t have before [2020]. I wasn’t looking through an anti-racist lens before, and I wasn’t looking through the lens of people who live in isolation before. And now, as I think through where we’re going as a nation and as an organization, if I keep those lenses on, anything that community engagement does will look different… and I’m excited to figure out what that is.”