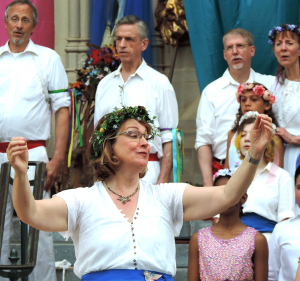 Betsy leading a song during the May Revels. Photo by Barry Galef © 2019.

Betsy knew of Revels in college, when she owned a Christmas Revels LP record. She finally got a chance to see the show in DC in 1991, and fell in love. She says, “it was a really striking performance because the group from Russia came in and… I had never heard singing like that before.” Betsy says her favorite thing about Revels is that “it had lots of variety: many different ages, many different kinds of music… It’s always something interesting to me.”

Just two years later, Betsy decided to audition for the 1993 Celtic Christmas Revels. She told me: “At that time, my son Austin was like 5 or 6 years old, and so I was finally feeling like maybe I can do something again, and so out of the blue I called and made an audition appointment.” This delay in pursuing her passion in order to raise her child is something many women have done, and many men have never considered, but we are hopeful that times are changing towards more equitable expectations of parenting that are not based on gender.

Women have always had a place in the leadership of Washington Revels, so Betsy said it felt natural to ask to be considered for music director. She says, “there were a lot of really good [female] role models in the leadership area of Revels, whereas you might not have seen that in some other organizations.” These “other organizations” include Betsy’s past experiences with classical music. She was classically trained in voice at the Eastman School of Music, where “I would say that the leadership roles, the directors, the conductors, most of my experience was with men in those roles.” In contrast, she says “I really feel like Washington Revels doesn’t differentiate so much [based on gender].”

Revels has faced many sudden changes over the past year, but because of these challenges, Betsy says the organization has had more fruitful, creative, and community-based discussions about how to move forward and continue to grow. “In the past,” she says, “we’ve kind of been tied down a little bit by, ‘this is the way we’ve always done things, this is the Revels way,’ and the pandemic has released us from that.”

Betsy says the biggest change is from a Christmas Revels focus “to a much more continuous flow of activities and programming that goes all through the year… to a year-round model.” Betsy is planning to retire from her day-job soon, but hopes that will just give her more time to “revel.” Specifically, she hopes to lead “a year-round kind of chorus that isn’t just a chorus for Christmas and a chorus for May, but something that is multigenerational and can do things all during the year.”

Still, as Betsy points out:

From the music side of things, not being able to hear people sing is the hardest thing that I’ve ever had to do… When we finally get vaccinated and find ways to gather together again and actually hear each other’s voices, it’s gonna be pretty magical.