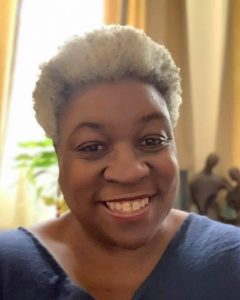 Andrea has always wanted to perform, but majored in Journalism at Wayne State University in her hometown of Detroit, Michigan, because her father encouraged her to pursue what he saw as a practical degree. She then did marketing and a fellowship in orchestra management, as a way to be involved in music performance without doing it herself. For a while, she thought that would be enough, but she loves performing, and she says Revels “gave me the strength to really set out and perform on my own.”

In college, Andrea had boar’s head feasts with her sorority sisters and tried to establish a performing arts group, so it’s no surprise that when she moved to DC, she auditioned for the Christmas Revels chorus. Despite her initial shock that the audition was not just for singing, she quickly fell in love with Revels. She says, “I was looking for a family, I think, being so far away from my family in Detroit.” Again and again, Andrea says, “This is family,” because “people have always been there for me” in the Revels community.

Andrea says Revels is important for “music geeks of color like myself” because of how welcoming and inclusive the community is. “What I want to do and what I’ve always wanted to do… is to say, ‘yes we can do this, yes I can be on the stage, yes I can represent.’” Revels has given Andrea that opportunity, and she thinks “Revels helps us overcome cultural stereotyping, by just showing the rituals and the music and the things that draw us together as human beings.”

Andrea has seen Revels grow and change over the years, and now “what I’m seeing is the circle is getting wider… and we’re also working on having some difficult conversations about what that means. But to me, it’s making the organization stronger.” Andrea is proud that Revels “is working to make sure that we are as inclusive and as welcoming as we are on stage; that we are working… to catalyze change.” She says “Revels does that through what we do best: singing and music and teaching folks that we cherish the fact there are very many different people that make up this world, but we’re all one humanity.”

There are so many women in Revels that she admires that she can’t list them all, but Andrea says she was grateful that “Mary Swope listened to me when I asked her, way back in the 90s, about diversity in Revels.” She also says that June Lambert, who was a vibrant member of Jubilee Voices until her passing in 2014, “had a message for all of us: Live your life to the fullest. Stand on your convictions. And don’t be afraid to sing out.” Andrea says, “As a woman in Washington Revels, I’m taking her philosophy and her legacy, and trying to apply it to what I’m doing with Jubilee Voices, and what I’m doing with the organization… There are so many women who touched my life, particularly in Revels.”

Andrea says that the late Doris Rhodes, a former member of the Revels board, “inspired me to push on, to keep things diverse, and to not be afraid to bring up uncomfortable subjects.” Because of that inspiration, Andrea herself has contributed to Revels’ growth over the years. She says one of her most memorable experiences was directing the Jonkonnu sequence in the 2006 Christmas Revels:

“Jonkonnu is an African American holiday celebration whose roots can be traced back to Jamaica and to the slave ships from West Africa. We were fortunate to have tradition bearers… to teach us the music and traditions of that community celebration.  I loved all the aspects of researching and directing this scene… I felt a real kinship with the material.”

Initially, “Not being a music major, and learning the technical aspects of music as I’m going, I felt like I wasn’t adequate to that challenge [of directing the Jonkonnu sequence], so it was always a dream. But sometimes, dreams come true.”

That experience inspired Andrea to found Jubilee Voices in 2010. Andrea says it was exciting, doing “lots of planning; research; working with tradition bearers; meeting Black families with historic roots in the Washington DC area, and learning their stories; and most importantly, pulling together the fabulous group of people who are Jubilee Voices.”

Andrea is looking forward to continuing her work with Jubilee Voices and with Washington Revels—with her second family—to widen the circle and “joyfully reach out and invite others to become part of the dance.” 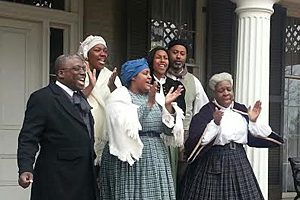