A Visit With Joan Burns, Chair, Board of Directors 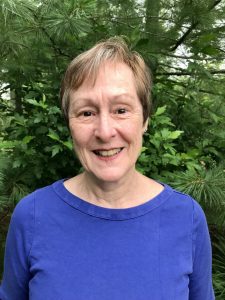 Joan Burns was first introduced to Revels in the 1970s, when she received a vinyl record of an early Cambridge production. That record instantly became a family holiday favorite. So, when she saw an advertisement in 1983 promoting the very first Christmas Revels in DC, she knew she had to go. Since then, Joan has been in the audience for almost every Washington Christmas Revels production (and even spent a few minutes on stage one year as the Lady of Misrule!) After getting to know Roberta Gasbarre and Greg Lewis through local community arts circles, she joined the Board of Directors in September 2018, and was appointed Chair of the Board early this year.

“Getting to know all these folks in the performing arts from around the world, it just fed me.”

From a young age, Joan always loved learning about other cultures. After majoring in anthropology and pursuing a career in several fields, she joined a brand-new nonprofit, Class Acts Arts (now Artivate), in 1996. The organization offers arts-based learning experiences through performances and workshops with professional teaching artists from a wide range of cultural traditions—much like Revels. Indeed, she partnered with Washington Revels numerous times over the years to bring Christmas Revels tradition bearers into local schools. Joan helped grow Class Acts Arts for 17 years, first as associate director alongside founder and fellow Reveler Busy Graham, and eventually as executive director.

“I’ve always felt that Revels’ invitation to be part of something bigger than me is not unlike the way women everywhere make extra room at a table.”

Joan believes that, from the very beginning, female leaders of Washington Revels have always been key in gathering people together to join the larger Revels family, whether on stage or in the audience. Her admiration for them is apparent: she explains, “The Revels women I’ve come to know have really impressed me with their creativity, their respect for others, and the love they’ve shown me as an audience member.” Now Chair of the Board herself, Joan feels a keen responsibility to keep extending that invitation to the wider community, both to honor early Revels leaders and to carry out a larger, historical women’s tradition.

“I think that Revels celebrates our common humanity unlike any other organization I know. We delight in what binds us together.”

Like many Revelers, Joan thinks the most unique aspect of the organization is its community-based approach and acute ability to bring performers and audience members together.  She feels that, despite the challenges that Revels has faced over the past year, the shift to online programming during the pandemic has allowed Revelers across the country and world to come together in song and celebration. Instead of just focusing on Christmas and May, Revels has been able to highlight many more cultural traditions throughout the year. She explains, “those traditions are being presented by the people who know them best. And so, there’s an authenticity to the experience.”

Going forward, Joan hopes to continue to foster this sense of family and connection by enlarging the Revels circle with expanded programming and new, diverse community partners. As she says, “We want to invite every person to fully participate and be welcomed with openness and respect, and really think about our larger community in a new way.”