Adapted from an article by Terry Winslow, longtime May Revels Producer
June 1, 2019

With two May Revels performances under our belts this past month and summer well and truly here (yes, we know we’re still pre-Solstice, but really!) we’ve fielded many questions about this annual celebration of the “greening of the year.” Fortunately for us (and all seekers of May Revels knowledge) back in 2012 Terry Winslow — who created all the movements that go along with the song “Rattlin’ Bog” — wrote a terrific summary of the May Day traditions that have appeared in May Revels over the years! 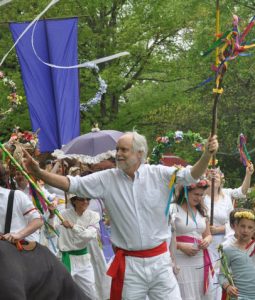 Terry Winslow in a May Revels parade.

For 35 years, Washington Revels and its audiences have celebrated the arrival of spring with performances on the first weekend of May featuring Revels’ usual combination of music, song, dance, and drama. Like many of the traditions that Washington Revels celebrates year-round, May Day has its origins in ancient festivities marking the changing of the seasons. These traditions relate to humanity’s vulnerability in the face of nature and its use of community celebrations to express the joys and fears surrounding the cycle of life.

May Revels is built upon the English tradition of venturing forth before the sunrise on May 1st to gather flowering branches and a Maypole, which were carried home triumphantly at dawn. The celebration that followed was originally a raucous affair with uninhibited dancing, drinking, bonfires and more. In Victorian times, May Day became more dignified, with “proper” dancers circling a Maypole while holding (newly added) ribbons. And the festivities came to be overseen by a May Queen — a youthful symbol of not only fertility, but also of innocence.

May Revels productions include aspects of both the raucous and the dignified lineages of May Day. Our celebrations always begin with a colorful processional in which the “Noisy Band” plays, children wave ribbons sticks, and chorus members carry whimsical props ranging from tall banners, to dragons’ heads, to flying birds, and many more. Our songs cross a variety of genres, from lovely Renaissance madrigals to “Rattlin’ Bog,” a rollicking, audience-participation testament to the cycle of life. The performances often include songs by the adult/teen chorus, children’s singing games, Morris dancing, a mummer’s play, the crowning of a May Queen, and the singing of “Wild Mountain Thyme” with the audience. 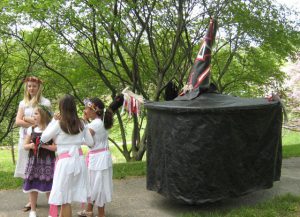 Another hallmark of past May Revels is “The Padstow May Song” – a processional song led by a ritual Hobby Horse (the Padstow May ‘Oss) with dancing by “teasers,” performed for centuries by the inhabitants of the small fishing village of (where else?) Padstow, in western England. During the procession, the ‘Oss “dies” several times and each time leaps up, providing a powerful symbol of the renewal of life after the long winter. The performance ends with a procession to the Maypole, which is danced first by chorus members and then with multiple audience members (adults and kids) on each ribbon — affectionately known as the “train-wreck” Maypole dance.

As you can tell if you’ve attended past May Revels, some elements change over time — for instance, our Padstow ‘Oss has been “stabled” for the last few years, and this year the role of “May Queen” was changed to “May Monarch” so that it can be played by anyone. Like those Victorians, we’re preserving traditions in ways that matter for the here and now, to help our ever-growing and ever-changing community celebrate more meaningfully at May Revels and throughout the year!

Don’t Miss Our Free Virtual May Festival in 2021…
Register for “Celebration of Spring!”

May Revels in the News!

It certainly feels like Summer is here, but this wasn’t necessarily the case when we welcomed the season with May Revels on May 4 & 5, 2019. In fact, if you joined us for our performance at BlackRock Center for the Arts, you probably dodged several raindrops. In spite of the downpour, we thought our first-ever May Revels in northern Montgomery County was pretty newsworthy — and CultureSpotMC agreed! In case you missed it, you can read CultureSpot’s feature preivew here.

We’ll Take That to Go: Parades, Processions and Connecting with the Broader Community
Posted by Washington Revels