The Music that Weaves Through Our Life (Part 1)
Coming Full Circle: A Year, A Song and a Special Revels Teacher 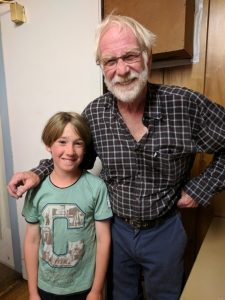 Volunteer, community asset, and mom of Revels Kids, Anna and her family can be found Reveling in programs from Christmas Revels, May Revels, Community Sings, parades and more.

This past summer, after traveling north to spend time with relatives in Quebec and explore a little the environs of this year’s Christmas Revels, we headed “down east” to the coast of Maine. Like certain migratory birds and butterflies, we like to go back to the same place each year, camping along the shore and under the stars, as many generations of our family have done. Each year there are places we must visit and activities we must engage in, as is tradition — a certain lake with a raft that we must cast a line and take a dip in, a certain beach of sand made of broken shells and a bog-stained estuary which we must pass the day and cycle of the tides at, a certain cobblestone cove where one can find finely polished stones many colors of the rainbow. These are sacred spaces and rituals. Occasionally new discoveries are made which over the course of a few years turn into new traditions, weaving into the rhythm of our time and space away from home. Stopping by the Common Good Cafe in Southwest Harbor on Mt. Desert Island for a brunch and live music is one such newer tradition.

The cafe is an entirely volunteer-run, donation-based cafe that serves freshly made popovers and more to raise money for a soup kitchen and community events for locals during lean winter months when tourists are gone. The cafe used to be housed in a large building overlooking the sea but now has an outside location in the heart of Southwest Harbor, with tables shaded by red umbrellas and surrounded by a perimeter of colorful flowers. Every year when we’ve visited, one of the soup kitchen’s co-founders, a white-bearded man with a smile, open arms and a gravelly, warm voice, has been a fixture, busily welcoming patrons and shuffling back and forth with warm popovers straight out of the oven.

One of the added perks of enjoying breakfast or brunch at the cafe is live music. This might include a solo guitar player, a rollicking uke band made up of local residents, or the acoustic duo Timbered Lake, whose lyrics and melodies we fell in love with the first time they washed over us the very first time we checked out the cafe. Another added perk is an amply supplied toy corner, great for parents who want to sit and linger awhile.

This year we planned ahead and made sure to visit Common Ground on a day that Timbered Lake would be playing. Our daughter immediately ran inside to play with the toys (play is often higher than food in our kids’ hierarchy of needs!). We followed her in and upon entering noticed on the wall a large picture of the friendly white-bearded co-founder which hadn’t been there before. We wondered about it. Had he passed away? We asked a volunteer and learned that indeed he had this past spring. As we went back outside and around the corner to the outdoor seating area I was thinking about this man who had a vision, started a soup kitchen and cafe that feeds not just body, but also soul, that gives people of all walks of life an opportunity to be of service to others and share in community, and how he had died but this cafe has gone on and seems as bustling as ever.

Upon entering the outdoor seating area, I glanced up at the brick wall behind the tables of beverages and fresh popovers and noticed a flyer advertising an upcoming concert at Southwest Harbor’s Legion Hall in a couple days. It featured the picture of a white-haired man with a guitar. David Mallett. David Mallett? I paused….hmmm….the name seemed familiar, but why?….hmmm… Then it came to me, isn’t that the guy who wrote“Garden Song”? No, couldn’t be. That would be weird. What are the chances?…But I think that really is his name…

“Garden Song.” It is a song that has woven through our lives for many years and gained greater poignance this past year. A song about about gardening…and life…Inch by inch, row by row… I’m gonna make this garden grow… All it takes is a rake and a hoe…And a piece of fertile ground … Could this really be the guy who wrote the song that the beloved longtime Revels Little Dragons teacher Oran Sandel taught children each year in his class? 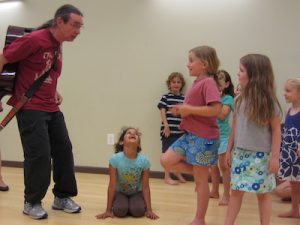 My son had just turned five when he became a “Little Dragon” and he loved the playful, musical, theatrical fun of Oran’s class, which quickly became a highlight of each week, and the class sharings a part of our family’s seasonal rhythm. There were mischievous hobgoblins tying cow tails in the fall. Candles and songs in the darkness and a great dragon in the winter. And the Garden Song in spring…Old crow watching hungrily…From his perch in yonder tree…In my garden I’m as free…As that feathered thief up there…

Our family attended the Christmas Revels for the first time that year and I still vividly remember how many of the “Little Dragon” classmates eagerly gathered at the edge of the stage afterwards to meet their teacher, who had a lead role in the show. He was fully made up and wearing all sorts of fine costumery and they were in awe. So when I had heard that Oran had “lost his voice” last year — the same day that many children who were once in his class were auditioning for the Christmas Revels — I listened to this news, but did not hear silence….I heard a chorus of children singing…singing the Garden Song…singing (literally) songs from the audition that they would go on to sing in the Christmas Revels…and many other songs and songs to come….A whole chorus rising up… 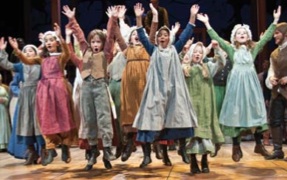 I had never known who wrote “Garden Song,” but as part of efforts to brush up on the song before Little Dragons alumni were videotaped singing it for Oran last fall and also before Oran’s memorial in the spring of this year our family looked it up on YouTube. There was the Pete Seeger version, the John Denver and the Muppets version, and the Arlo Guthrie version, but the version that blew us away was the David Mallett version. In reading the blurb below we learned that it was he who wrote the song, and indeed you can feel his spirit in what he sings as “a working man’s song.”

As we sat down with our popovers to listen to Timbered Lake my husband did a search on his phone and quickly confirmed that this was indeed the same David Mallett who composed “Garden Song.” We have to go to the concert, we said to each other in unison.

Did they go to the concert? Is our Québécois Christmas Revels the third year Anna’s son will be in the Children’s Chorus? Check back for Part 2 to find out!