May 17 — Heritage Voices at the Grand Review Parade 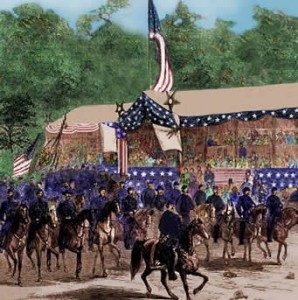 Over 10,000 reenactors and big audiences are expected at this important commemorative event! Throughout the course of the parade, there will be musical performances at Freedom Plaza (the endpoint of the parade) with Heritage Voices and the Roustabout String Band performing at various times.

The Grand Review parade reenacts and celebrates the “Grand Review of the Armies” that took place on May 22-23, 1865 — a two day parade in which over 150,000 Union soldiers marched on Pennsylvania Avenue past a reviewing stand with President Johnson, his cabinet, and General Grant. Johnson ordered the parade to signal to the population that the war was over, and to lift the mood in Washington, which was still in mourning from Lincoln’s recent death.

On Sunday, May 17, 2015, a reenactment of this parade will take place in its original location — on Pennsylvania Avenue — from 3rd Street to Freedom Plaza at 13th Street. Exact performance times for Heritage Voices will be announced shortly, please check back here for details. For more information on the history or the May 17 event, please visit the Grand Review Parade website.

Learn more about Washington Revels Heritage Voices and the Voices of the Civil War programming.