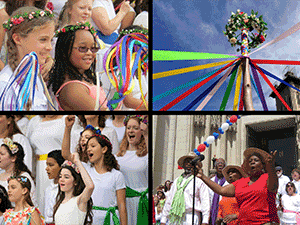 Each year in April and May, Washington Revels celebrates the arrival of Spring with traditional music and dance!  The centerpiece of every Spring Revels celebration are western English Spring traditions, with singing by Washington Revels’ adults, teens, tweens, and children, the crowning of the festival monarchs, Maypole dancing, and plenty of audience participation.

In 2022, we presented two performances. On April 30, Washington Revels celebrated the seasonal opening of Glen Echo Park’s 101-year-old Dentzel Carousel! We kicked off the day with a festive procession throughout the park, followed by some joyous Maypole dancing, and a festive celebration of Spring in the Bumper Car Pavilion. This family-friendly show will include many opportunities for you to join in the singing. On May 7, Washington Revels closed out the 2022 National Cathedral Flower Mart with a May Revels performance. Adults, teens, tweens, and children were joined by the Whiskey Before Breakfast Band, to present a festive celebration. We sang, danced, crowned a May monarch, presented a Spring mummers’ play, and invited everyone to sing-along!

In 2019, we partnered with BlackRock Center for the Arts in Germantown, MD to bring May Revels to northern Montgomery County. Our 2020 production continued, in spite of COVID-19, as a virtual May Day festival with activities over three days via the innovative Daily Antidote of Song program, and in 2021, audiences experienced May Revels traditions in a new way during our virtual “Celebration of Spring” video release!

The likely dates for the 2023 Spring Revels celebrations will be Saturday, April 29 at Glen Echo Park and Saturday, May 6 at the Washington National Cathedral. Dates will be verified in early 2023. 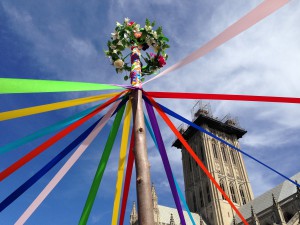 The Maypole with woven ribbons at the National Cathedral 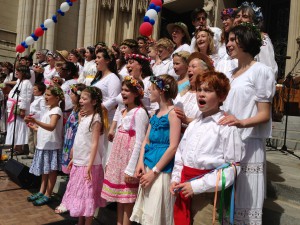 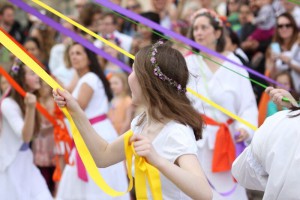 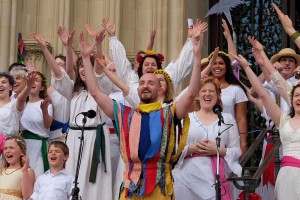 Reveling with the May fool 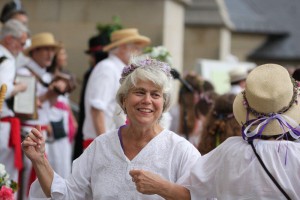 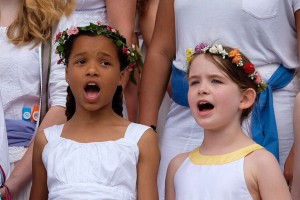 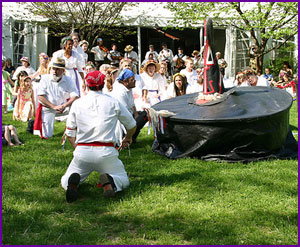 May Day in Padstow, Cornwall begins at midnight, when groups of ‘mayers’ meet outside the Golden Lion Inn to serenade the owner with their Night Song:

Rise up, Mr. _____, and joy to you betide,
For summer is a-come in today;
And bright is your bride, that lays down by your side
In the merry morning of May.

After this salute, the mayers roam the town, bidding neighbors to ‘rise up’ and celebrate. By dawn the village children are stirring, ready for expeditions after leafy or flowering branches, known as ‘may’ Eleven am finds everyone back at the Lion, awaiting Padstow’s celebrated Obby Oss–a bizarre red, white,and black creature, said to represent a dragon evicted from the region by St. Petroc. Its body is a large hoop draped with black cloth, with a tiny horsehead and tail mounted on the rim. Between the head and tail rises a startling, sharp-toothed mask, supposedly brought from Africa in the 1860’s (though the Oss itself is certainly much older). On top is a conical hat bearing the mysterious letters O.B.–either a reference to ‘Obby,’ or to Oswald Brenton, a much-acclaimed Oss of days gone by.

Escorted by the Teaser, and trailed by dancers dressed in white with red sashes, the Oss cavorts through the decorated streets. Occasionally, spurred on by cries of ‘Oss, Oss, wee Oss!’, it attempts to pull young women under its skirt; any girl fortunate enough to be caught is sure to marry within the year. These antics are accompanied by more Night Song verses:

Unite and unite, now let us unite,
For summer is a-come in today;
And whither we are going, we all will unite
In the merry morning of May.

At times the singers switch over to the more solemn Day Song.

O where is St. George, O where is he now?
He’s out in his longboat, all on the salt sea-o.
Up flies the kite, down falls the lark-o.
Aunt Ursula Birdwood, she had an old ewe,
And it died in her own park-o. 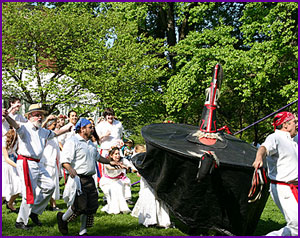 It is a dark moment. England’s defender is gone, and the world is in turmoil. Even the birds, the swooping kite and the soaring lark, are shocked out of their usual habits. The Oss responds by sinking to the ground and ‘dying’–though he springs back to life a second later, when the Night Song is triumphantly resumed. This sequence repeats itself until evening, when the Oss meets the Temperance Oss (a newcomer, born in the 1890’s) for a maypole dance in the town center.

The Day Song may have roots in local history. Like St. George in his longboat, the men of Padstow abandoned the village to fight during the Hundred Years War. When French ships appeared off the coast, Aunt Ursula supposedly rallied the women to march along the cliffs in red cloaks, with the Obby Oss heading the line. The invading French are said to have turned and fled, frightened by what seemed to be an English army with ‘the devil himself’ in command!

The above information is taken largely from Charles Kightly’s book, The Customs and Ceremonies of Britain. May Day in Cornwall.