The Washington Revels Jubilee Voices ensemble is committed to the preservation of African-American history and traditions–presenting songs and stories of struggle and perseverance, trials and triumphs, as expressed through a cappella music, drama and dance. Inaugurated in 2010, the group now performs regularly at heritage sites throughout the Washington DC area, singing, sharing, and learning the stories of the people in those communities.

Read an article, “From Spiritual to Freedom Song: Tracing the Road to Freedom through Music,” by Jubilee Voices director, Andrea Jones Blackford.

At the core of Jubilee Voices are the singers. In this primarily a cappella group, each singer is auditioned and through rehearsal and group sharing their unique and authentic sound is achieved.  Most singers also present spoken word and participate as soloists.

In loving memory of two cherished members of the Washington Revels Jubilee Voices:

May you rest in peace and power.

“I saw your program at Surratt House and want to let you know I thought it amazing, most entertaining, thought provoking, educational and poignant. The players really took one back to the awful days of slavery and then to the happy days of freedom. Everyone should see this presentation by the Jubilee Voices, they were grand.” —Joan L. Chaconas, History Specialist, Surratt House Museum, Clinton, MD

Thank you very much for being with us on Heritage Day. The feedback about your presentation was amazing, the concert at Sugarland was the topic of conversation in many of our neighboring black communities, especially by those who were not present wishing that they had attended after listening to those that were. Those that did attend were in awe. We received comments by many that they felt an overwhelming sense of bonding with the ancestors. The most quoted statement of the evening was, ”absolutely awesome, I love them,” another said, “I have never experienced anything like this before,” one said that she felt “spellbound.”One quote was, “watching and listening to the slave girl was mesmerizing.” Many expressed interest in learning more about your organization and the Jubilee Voices. –Gwendora Reese, St. Paul Community Church/Sugarland, Poolesville, MD 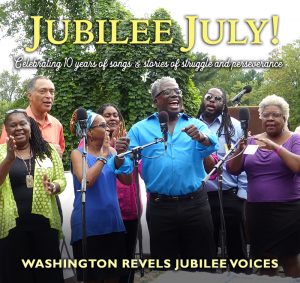 On July 31, 2010, the Washington Revels Jubilee Voices held its first rehearsal, kickstarting a 10-year journey that would see this wonderful ensemble perform at venues, festivals and heritage sites throughout DC, Maryland and Virginia, and featuring frequent appearances on television and in the local news media.

To mark this milestone, we devoted the entire month of July 2020 to a series of events: song leading during the “Daily Antidote of Song,” social media features, spotlights on the singers, and more! “Jubilee July” highlighted memories from favorite performances over the past 10 years and culminated in a live virtual celebration on Friday, July 31, 2020.

You can relive our special virtual event marking the 10th anniversary of Jubilee Voices! Enjoy newly produced video performances, hear from special guests and past members of the ensemble, and sing along with us! 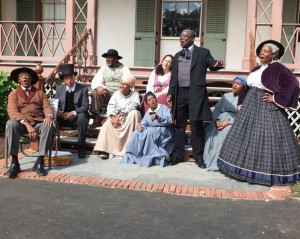 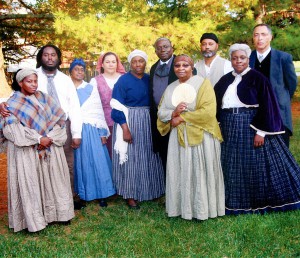 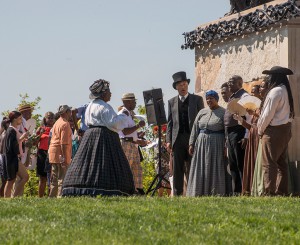 Andrea Blackford leading Jubilee Voices at the opening of the Contrabands and Freedmen Cemetery Memorial in Alexandria, Virginia. 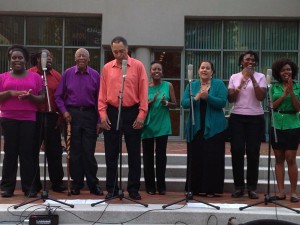 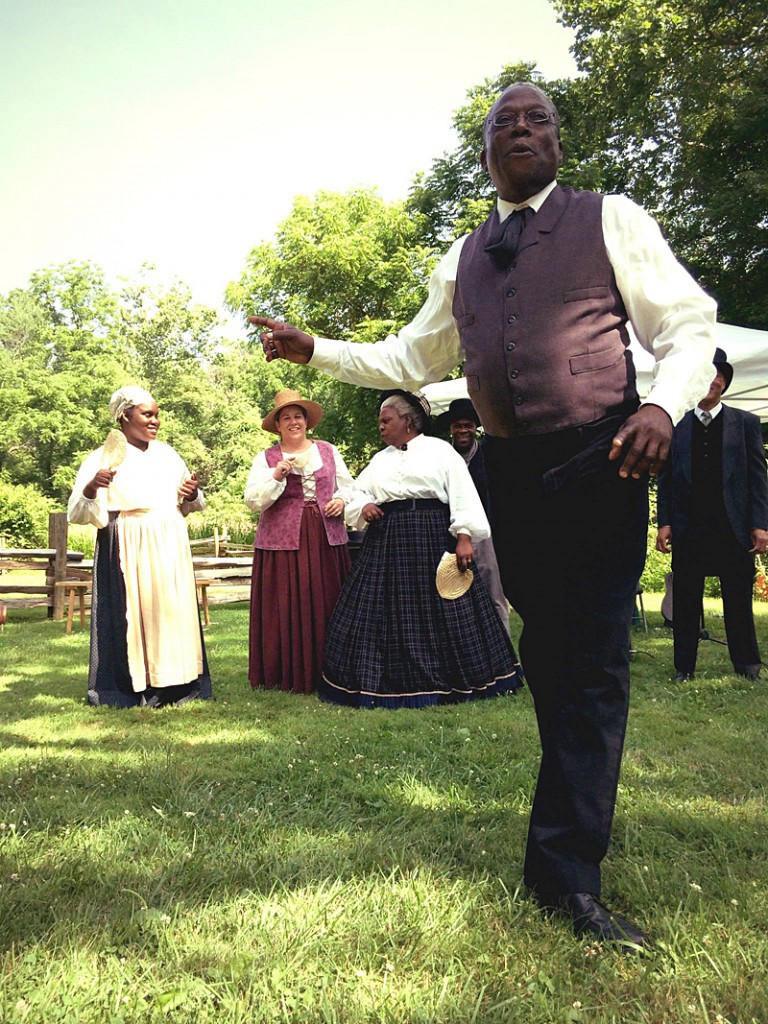 Jubilee Voices performing on the steps of the Frederick Douglass National Historic Site in Washington, DC. 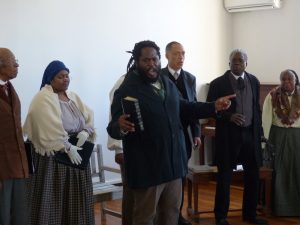 For more information about Washington Revels Jubilee Voices, and to explore hosting a performance at your site, contact Colin Bills at cbills@revelsdc.org.