A Nordic Celebration of the Winter Solstice in Music, Dance & Drama 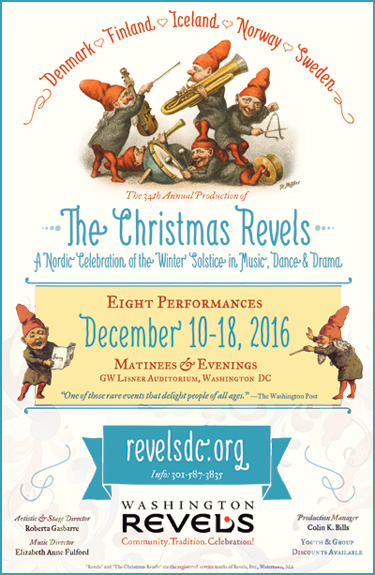 Join us on a journey into the wonders of Nordic winter traditions! As our families from Denmark, Finland, Iceland, Norway, and Sweden gather to celebrate the season, let the haunting melodies, breathtaking dance, epic folk legends, and joyful carols get you into the holiday spirit!

Discover mythic drama from Finland’s epic Kalevala. As the moon lights the snow, watch the spirited Icelandic Vikivaki as a mysterious stag looks on. Celebrate the Swedish “bringing of the light” by Sankta Lucia with her crown of candles. Watch dancers twirl in the hypnotic Telespringar and thrill to the spectacular leaps of Norway’s Halling dance. Be enchanted by the songs and dances of our children, and participate in their retelling of a beloved Norwegian fairy tale. Delight as we decorate our tree with traditional woven hearts and raise your voice with us in festive Danish toasts and carols.

FAMILY FRIDAY NIGHT:
25% off Youth tickets on December 16 at 7:30pm
Save money and bring the whole family on Friday night!!
Please Note: Discounted Youth tickets do not count toward 10-ticket and 20-ticket thresholds for purposes of group discounts. 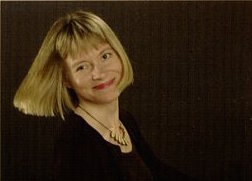 Merja Soria, a native of Finland, was the first Finlandia Foundation “Performer of the Year” in 1996. She received an MA in Music at the Sibelius Academy in Finland and has taught Finnish music at San Diego State University and University of San Diego. In 2005, she received an award at SDSU for Academic Excellence and Community Outreach. Merja has performed at the Los Angeles Music Center, Smithsonian Institute in Washington DC, Toronto Centre for the Arts, Peninsula Music Fair, and many other music festivals in the US and Europe. Currently, Ms. Soria teaches the young children of San Diego at her own music program, Miss Merja‘s Music Room. 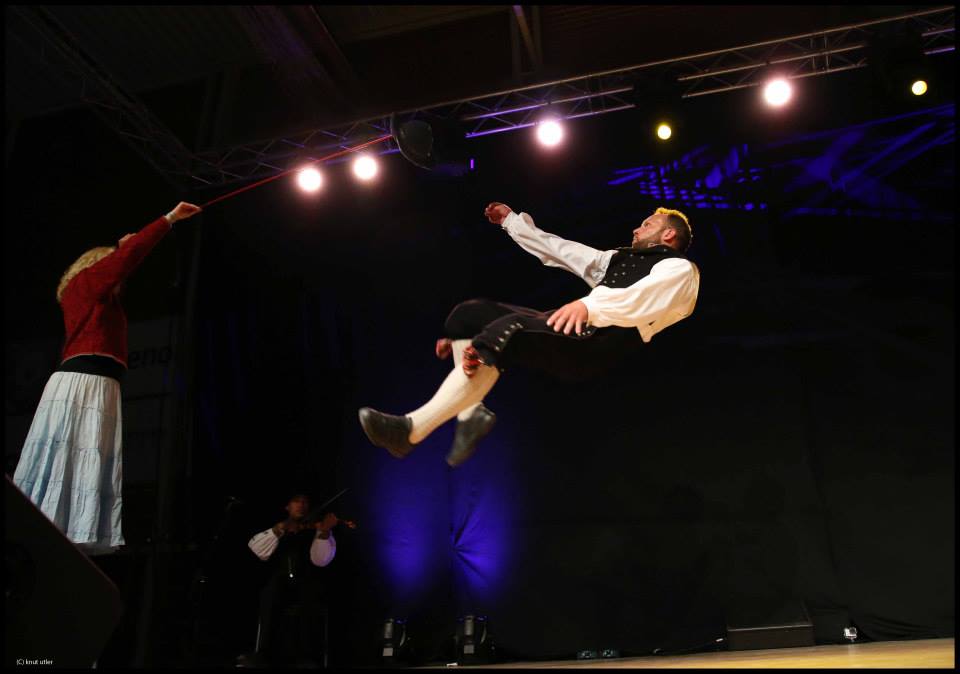 Tom Løvli will be traveling from Norway to dance in the 2016 Christmas Revels. Tom grew up on a sheep farm in upper Jondalen, northwest of Kongsberg. At age seven, Tom began to learn the leaps and kicks of the Halling dance. In 1985, when he was 12 years old, Tom competed in Norway’s national folk competition, Landskappleiken. At 18, he and a colleague made their first appearance in Washington, DC. Over the years, Tom has danced in more than 100 shows across the United States. He has also danced throughout Europe and accompanied the Olympic torch for the 1994 Winter Olympics in Lillehammer. On the way, he kicked the hat so hard that it landed in Queen Sonja’s lap as she sat next to Queen Margrete of Denmark—the Queen laughed while security fumed. In 2003 he became the Norwegian champion for the first time. Tom danced with Washington Revels in 1996, again in 2005, and his Halling dance will be a highlight of the 2016 show. 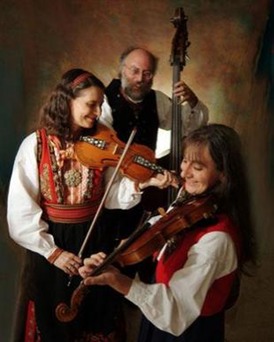 Andrea Hoag, Loretta Kelley, and Charlie Pilzer have performed at concerts and dances across the U.S. and in Europe for over 25 years, including appearances on All Things Considered, Performance Today, and Prairie Home Companion. They can be heard together on their recordings Hambo in the Snow and Hambo in the Barn. Andrea, widely known for her versatile fiddling, is a 1984 graduate of Malungs Folkhögskola, and studied intensively with Swedish fiddlers Päkkos Gustaf and Nils Agenmark. Loretta is America’s foremost player of the hardingfele (Hardanger fiddle), an ornately-decorated Norwegian folk violin with sympathetic strings and a 300-year-old tradition. She has studied with numerous master fiddlers in Norway and placed highly in Norwegian fiddle competitions. In addition to being a nationally renowned audio engineer, Charlie is an award-winning performer and producer of traditional and acoustic music. He is a long-time member of Spælimenninir, a folk band based in the Faroe Islands. 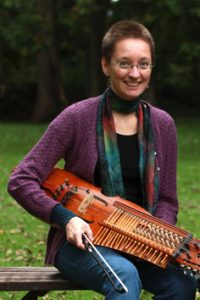 lydia ievins plays 5-string fiddle and nyckelharpa for Scandinavian and English Country dancing. Her absolute favorite thing about playing in either genre is the boundless opportunity to create rich harmonic lines. As an avid dancer herself, she infuses her playing with rhythmic clarity and sensitive phrasing to produce eminently danceable music. Her duo album Northlands with Bruce Sagan features a collection of original tunes inspired by Scandinavian traditional styles. She is a 2013 graduate of the Eric Sahlström Institute in Sweden, located at the epicenter of the nyckelharpa universe; her duo album Fika with Andrea Larson and Trip to Tobo tunebook feature favorite tunes from that sabbatical year. She maintains an active performance and teaching schedule with duo partner Andrea Larson, with whom she has developed a popular intensive weekend workshop for Scandi-interested dance musicians. lydia is pleased to have been awarded a bronze Zorn medal in Sweden for her playing in the Uppland tradition. 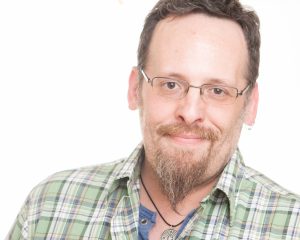 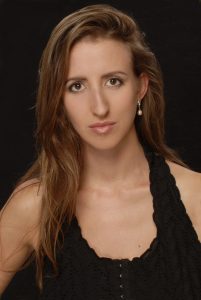 Sarah Olmsted Thomas is a fifth-generation artist and a proud company member of Happenstance Theater.  Other collaborations include Bread and Puppet Theater, Center Stage, and the Kennedy Center.  Sarah makes puppet shows with her husband Alex that have played Strathmore, LaMaMa, and two National Puppet Slams.  Sarah trained with the Pig Iron Theatre Company in Philadelphia and Le Samovar, École de Clowns, in Paris. 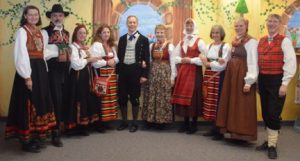 The dancers and musicians of Scandia DC are dedicated to the enjoyment of Norwegian and Swedish couple dances in the Washington D.C. metropolitan area. Directed by Linda Brooks and Ross Schipper, the group performs a large variety of dances including gammaldans (a set of Nordic dances that became popular in the late 19th century) and bygdedans (regional and village dances) accompanied by live music. Linda and Ross have been teaching Nordic dancing for over 30 years and have taught and performed in many venues including the Kennedy Center Millenium Stage and the 1996 and 2005 Nordic Christmas Revels productions. They have researched dances from Nordland in Norway, earned the Big Silver Medal in Swedish Polska dancing in 2003, and produced teaching DVD’s for use by group members. Linda and Ross are members of the Nordic Dancers of Washington, DC and teach Norwegian and Swedish bygdedans to that performance group as well. 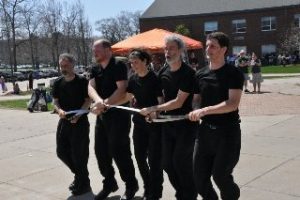 Cutting Edge Sword, a sword dance group from Washington, DC, performs new and re-interpreted sword and percussive dance styles including dances from the rapper and longsword traditions of the UK and Italy. Many of these dances originated in the mining districts of England and feature intricate and fast-moving figures with interlocked swords. Members of the team also perform percussive dances from the US and Canada. The team lives and dances socially in the Washington, D.C. metropolitan area. The group has performed numerous times with Washington Revels and remains a favorite of the Revels audiences year after year. The group was founded by David Shewmaker, and current members include David Roodman, Dave Casserly, Jerry Stein, Lynn Baumeister, Ted Hodapp, and Tom Spilsbury, with Sarah Foard on the Fiddle. 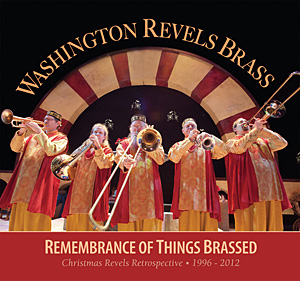