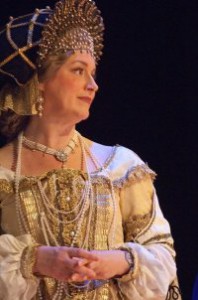 Elizabeth Fulford as “The Dogaressa” in The Christmas Revels

Elizabeth (Betsy) Fulford has performed with Washington Revels since 1993 and has served as its overall music director since 2004. In that capacity, she provides musical direction for the annual Christmas Revels production, May Revels, and the year-round performing ensembles Gallery Voices and Heritage Voices. In 2017 her work with the Christmas Revels choruses was honored when Washington Revels received the Ovation Award for Choral Excellence from the Choralis Foundation in the “Outstanding Specialty or Show Chorus” category. Betsy has produced three recordings for Washington Revels: Sing & Rejoice (2013; winner of the 2014 Best Classical Recording “Wammie” from the Washington Area Music Association); Hard Times Come Again No More: American Music of the Civil War Era (2011); and Le temps des Fetes: French Canadian Music & Dance in Celebration of the Winter Solstice (2010).

Betsy is a graduate of the Eastman School of Music (BM ’80 and MM ’82) where she performed roles in many operas, oratorios, and chamber works.  She was awarded three separate fellowships to attend the Aspen Music Festival and School in the areas of choral music, vocal chamber music, and opera theater. An active professional singer in the D.C. area, Betsy performs as soloist in local concerts and events and sings as a professional chorister with the Washington Master Chorale. She has also sung with many local groups, including the Wolf Trap Chamber Singers, Washington Bach Consort, Washington Master Chorale, Washington National Opera Chorus, and The Choral Arts Society of Washington. By day a librarian and webmaster at the Library of Congress, Betsy is also a freelance graphics designer and webmaster for several local artists and musicians, including Washington Revels. She currently serves as the assistant music director for Augustana Lutheran Church in Washington, D.C.